"A high ranking admiral who can hamper enemy income or rain destruction from above in his personal command ship."

Admiral George Mason is a hero of Usonia, a high-ranking military commander and the father of Captain William Mason. He has his own colossal floating airship that is armed to the teeth, can traverse any terrain, and sends death from above.

Mason himself is a tall man with wide shoulders and a strong jaw, his hair greyed with age. He also has a noticeable scar on his right cheek. He wears the blue and silver-trimmed uniform of a decorated and experienced naval officer, with four stars on his collar and a medal pinned to his chest. Interestingly, he also wears a bomber-jacket style of leather coat over his uniform with fleece lining commonly worn by fighter and bomber pilots, possibly indicating some prior service in a cockpit.

Even more imposing and austere than the man himself is his proudest command: the Queen Langely, a gargantuan armored airship bristling with firepower: a vessel built for shock-and awe. The zeppelin frame keeping it aloft is massive on its own, while the rest of the ship's chassis is built around it with a set of engines at the rear, a conning tower with a command deck, two pairs of naval guns, various other smaller armaments, and two huge red tanks of liquid fire slung underneath ready to let loose an inferno. The ship itself is said to be the Flagship of the Usonian Union's Mobile Air Corps, and for good reason: its impressive stature makes for an equally terrifying image when a Usonian Fleet is floating overhead.

Admiral Mason's ship is extremely powerful in combat, boasting good health and decent armor, but most importantly with a lot of broadside firepower that lets him go toe-to-toe with just about anything, including other air units. Essentially he is the aerial answer to Brunehilde, but with the added bonus of being able to ignore otherwise impassable terrain to hit from different angles or to facilitate retreat. His scorched Earth ability will wipe out even the largest ball of infantry almost instantly, and he can aid friendly forces by breaking up enemy line of sight with a massive smokescreen.

With size comes an important factor: all eyes (and weapons) are likely to be on the Admiral's ship. Anti-air weapons can still weather himdown fairly quickly, and enemies with sufficient numbers and weaponry like field cannons can bring him down fairly quickly. Fleeing from a fight is not much of an option given his poor speed, so it is important to either position him well in case he needs to flee or bring ample support.

George has spent much of his life in the military, and during his service he became a renowned and respected military officer. He is most known for establishing the Usonian Mobile Air Corps, a military branch composed of cutting edge aerial mechanical units. Over the last decade of service he has worked hard to modernize the Union's military with these units which can potentially project the nation's might anywhere on the globe. At some point he started a family, and had a son named William, whom he put through the military academy at West Point. When William was nearly expelled for sneaking live animals into the girl's dorms there, he used his influence to reduce expulsion to suspension. He also owns a famous vineyard.

At an unknown date, he entered dealings with Fenris, a sinister organization who lent support towards increasing his public influence and even getting William a shot at the Presidency, likely with aims to use him as a puppet to control Usonia and potentially guide them into wars.

As a result of the devastating civil war in the Tsardom, Rusviet revolutionaries began to seize American assets in the Alaskan territories which were under Rusviet jurisdiction, including oil refineries. Major businesses and oil company officials (likely involved with Fenris) who were associated with George demanded he take action, and he convinced the President to allow a military action to retake these assets. He gathered the Mobile Air Corps for an assault, sending William with an advance team to disable anti-air defenses. Once the Captain gave the all-clear, George sent him supplies to build a forward base.

Once William's forces had taken back the Rockford oil refinery, George's fleet detected a massive Rusviet force bearing down on his son's position. forcing him to personally intervene with his command ship and a sizeable portion of his fleet. Although the objective was completed, his backers were less than pleased with the outcome. Around this time, a reporter named Randolph Wells came to his attention, particularly his inquisitiveness as to George's true attentions and those of his backers. He had Randolph kept under observation and arrested a number of his associates.

George, planning to secure Arabia's significant oil reserves and to spread Union influence, dispatched William "off the books" to aid the Arabian's in ousting the Saxony Empire's forces occupying their territory. He had hoped that William would establish contact with Arabia's new king, Khalid, who had murdered the previous king (his own brother) and both of his sons to prevent the old king from accepting help from Nikola Tesla's alliance to remove Saxony. Through this channel, George aimed to convince King Khalid to request a full military intervention and standing armed presence to repel the Empire.

To his annoyance, William would instead ally with the Free Tribe guerilla fighters who were fighting against King Khalid, led by his niece Princess Sita al Habib. Instead of wanting a permanent military presence, she only wanted Usonia's help in securing Arabian independence, which was not in George's or Fenris' interests. Further aggravating the situation, William was against a full military intervention, so George and Fenris contacted Khalid directly to offer them a "better deal." Arriving with the Air Corp, George and Khalid had Sita and a number of European cohorts arrested, admonishing William for his disobedience.

Once more, William disobeyed his father by going rogue to rescue Sita and her allies, but not before having Wells fully expose the entire affair to the press back in Usonia. William then returned to potentially face charges of treason, as well as backlash from his father and Fenris for incriminatin the admiral. What occurred between father and son afterwards is currently unknown.

The ship comes armed with two sets of twin-linked naval guns similar to the one mounted on the Gulyay-Gorod. One pair faces astern, the other towards the bow, and can each rotate about 130 degrees to the left or right to track targets: both turrets can fire at a single target on the flank for heavy damage. One each side of the bridge are another pair of smaller twin-linked cannons, an additional pair of singular guns stand behind the main bridge for and two spherical machine gun turret rest on the ship's belly. Targets that get too close however bear witness to the most awe (and terror) inspiring ability of this ship: it lets loose a massive burst of fire saturating everything below the ship in flames. 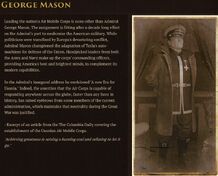 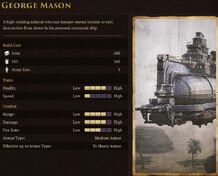 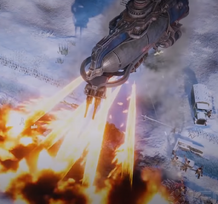