The Airlift, like all aircraft was added in the Operation Eagle Expansion.

The Airlift is a common aircraft that can be built by all factions. In a world dominated by land mechs the Airlift is a great addition to your army. It is a transport aircraft that can fly infantry squads across the battlefield. It also is armed with an anti-infantry machine gun used to take out straggling infantry or defence. The Airlift is a quick and easy way to get your infantry units from one place to another. With the medium armour the Airlift can take some good damage while keeping the infantry inside safe. It can transport infantry over bodies of water so they don't have to worry about going through a bridge. The airlift is like the Polanian mech PZM-16 "Zółw" but just in the air. The Airlift is a helicopter like mech attached to a small pod with two zeppelin like balloons on each side. The pod can hold up to one full squad of infantry.

The airlift is fast but with only medium armour the PZM-11 "Lowca" can easily take it down. There is only capacity for one squad of infantry so you may need a lot of them if you want to have a good attack. Since there is only one light machine gun it will need some escort from the Skybike. The Airlift should be used as a late-game fortification ignoring transport vehicle. If units are in a fight and some units are lost then the Airlift could be used as a rapid reinforcement without having to go back to base. In the right hands this could tip the victory in their favor. 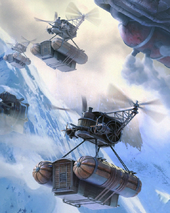 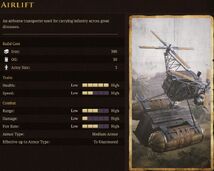