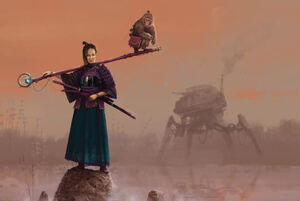 From an early age, Akiko, the niece of the shogun, read stories of warriors and adventurers in faraway lands. She was especially fascinated by the beauty and art of sword fighting. When she turned 16, Akiko begged her uncle to let her train at the most elite samurai war academy, and he agreed. She was a model student, practicing constantly until she excelled at fighting, shooting, strategy, and tactics. Bursting with pride, the shogun gave Akiko a special trained monkey named Jiro.

As Akiko was entering her second year of training, her brother, a prominent engineer, went missing during a mission to the mysterious Factory in Eastern Europa. The shogun’s advisors suspected that he had been captured by agents of the Rusviet Union. Trusting in his niece’s skills as a samurai, the shogun has empowered Akiko to lead a large military expedition to subvert the Rusviets, recover the Togawa engineers, and discover the truth of the Factory.