America is a nation and faction in the 1920+ universe.

Currently only mentioned in Iron Harvest and some concept art, their current state is left ambiguous at best.

America exists as an independent nation, far removed from Europe across an ocean. Although their government system is not specifically mentioned, they likely live under a constitutional republic. It likely consists of a major portion of the North American continent. Their symbol seems to be a simple white star and they fly their flag from their war machines.

Very little information is known about America in the World of 1920+ of Iron Harvest. It is unknown if it is called the United States of America or something else entirely. Based on Peace Party conversation between American guests, we know that America fought in Europe during the Great War though domestic issues seemed to brew at home with talks of a potential second Civil War.

Little is known about their tactics or weapons, but they seem to have the industrial and military power to match the Europan powers. This is seen with their mech as depicted in one of Rozalski's paintings. Massive, bipedal, and heavily armed and armored, it heavily resembles the PZM-24 "Tur." However, instead of a large forward viewing dome, the cockpit appears more protected behind slit-like windows, they have a top mounted turret, and they mount pairs of smaller-bore cannons. This indicates that America also has benefited from auto-machine technology like Europa.

An American Guest: "I'll tell you, we'll be facing a second civil war within the next ten years."

Another American Guest: "We should be fulfilling our destiny and taking the rest of Mexico, and the land up north too!"

Another American Guest
Add a photo to this gallery 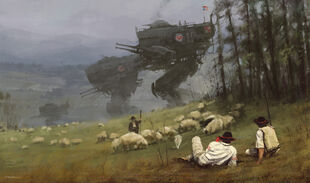 "Kosciuszko Squadron" by Jakub Rozalski
Add a photo to this gallery
Retrieved from "https://iron-harvest.fandom.com/wiki/America?oldid=5636"
Community content is available under CC-BY-SA unless otherwise noted.