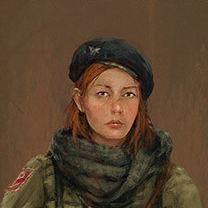 Anna, one of the Polania heroes, is a sniper. Many of her abilities have to do with stealth gameplay, range, and vision.

Note: The following is from the Scythe game, so information may change in Iron Harvest. Pics from Iron Harvest.

Anna was born into a long line of intellectuals and diplomats. After her parents (Piotr Kos is his father) died in the war, she moved in with her grandfather, a former soldier and avid hunter. He raised her and taught her how to shoot a gun. Over time, Anna became an expert marksman.

Add a photo to this gallery

She has a brother(not sure he's older or younger than her) who is called Janek. They and Wojtek were fighting Rusviet invaders during the Great War. https://twitter.com/KingArtGames/status/1209847322890424325

Retrieved from "https://iron-harvest.fandom.com/wiki/Anna_Kos?oldid=2470"
Community content is available under CC-BY-SA unless otherwise noted.