Princess Sita
Arabia is a faction set in an arid region of the 1920+ world.

While physically beyond Europa's borders, its riches have drawn the interests of the West, and multiple powers vie for its control while an internal power struggle is playing out.

Filled with shifting sand dunes and rocky foothills as far as the eye can see, Arabia encompasses a peninsula to the southeast of the European powers. It is overall governed by a monarchy, which is currently in shambles with the death of the previous king and his two sons, leaving his brother to take the throne. This has brought him into conflict with his niece who desires independence for her countries from all foreign influences.

It is a land with a long history of struggle and adventure; the Bedouin tribes that roam its sandy expanses are fiercely independent and skilled horse riders.

Little is currently known about the Arab's tactics and weaponry, but what few units that are shown seem to revolve around cavalry and stealth, although the current king's forces likely have military backing from the technologically advanced Saxony Empire.

The name "Arabia" is mentioned by a Saxonian guest during the peace festivities organized by Tsar Nicholas in reference to the Empire's ongoing presence in the Middle East, the diplomat says "Have you heard about Arabia? There are swarthy desert marauders attacking our troops!" at the time there are Saxonian colonies in the Middle East (likely controlling Syria as the French did in our timeline, and parts of modern day Jordon) besides imperial garrisons establishing the powerbase for local Kings like Princess Sita's Uncle, King Al-Hadid.

Apart from that, nothing is said or clarified about Arabia in the rest of the Rusviet campaign or that of Saxony or Polania.

In the Usonian Campaign, Captain William Mason is sent to Arabia to help create the conditions for formal Usonian military intervention on behalf of Admiral Mason. It is hinted that Usonia's forces have been sent there in the interest to secure access to Arabia's rich oil reserves, and Saxony has likely already laid claim to lands there for the same reason; however Captain Mason hopes to instead defend what he sees as the Bedouin Free Tribes humanitarian rights and eject Saxony whilst America leaves after defeating Saxony having 'lead by example'. While he is there he meets Princess Sita. who pleads for military aid to oust her uncle's government and Saxony out of military control of the land. However, she fears that if Mason's superiors have their way, she will likely just be trading one occupying force for another.

Mason also meets Gunter von Duisburg, Frieda Ruete, and Michal Sikorski all having been captured by Saxonian forces sometime after Colonel Zubov's Assault on The Factory but before the Rusviet Revolution Campaign DLC.

Sita's fears are realized when, during the Battle of Aqaba, Admiral Mason's fleet intervenes just as the Bedouins are about to achieve their first major victory in decades, revealing that his backers in the government made a better deal with King Al-Hadid for Usonian troops to occupy Arabia rather than Saxonian in exchange for the Princess' (along with Factory Alliance members) arrest and cessation of all Free Tribe support. William Mason directly opposes this by later leading a prison break and revealing a 'Military Industrial Complex' plot between the admiral, his father, alongside his public office-holding and private backers via the WUSO radio station. 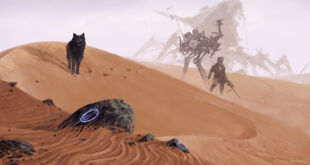 Gunter and Nacht investigating a mysterious meteorite in the Arabian Desert. 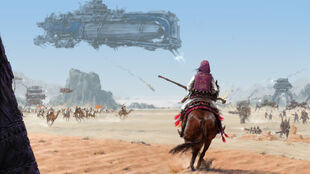 Saxony and Usonia in Arabia.jpg