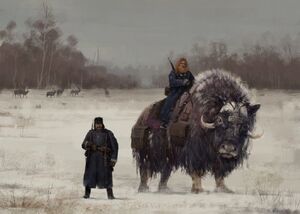 Bjorn, the descendant of a renowned Viking family, grew up in a small village in the north of the Nordic Kingdom. For centuries his tribe had bred and raised the massive musk ox seen on many farms across the arctic. From an early age, Bjorn found that he was able to tame and communicate with the huge animals.

When he was 15, Bjorn was caught in a terrible snowstorm while trying to find a young musk ox that had wandered away from the herd. He found the musk ox, but there was no hope of making their way back to the village. Much to Bjorn’s surprised, the musk ox seemed to understand the dire situation, as it created a protective barrier to keep Bjorn safe from the blizzard. After surviving the ordeal, Bjorn took the creature as his mount and named him Mox.

As an adult, Bjorn had a yearning to see the world beyond his tiny village, so he and Mox embarked on a series of adventures across the land. They served as ambassadors to other tribes, went on war missions, and sought to find new oil reserves.

Stories of their courage and heroism eventually reached the king, who asked Bjorn and Mox to participate in a special mission to venture into the south. They seek to add new villages and farms to their kingdom by diplomacy or by force, as well as to explore the Factory to give them a technological advantage in future wars.

Retrieved from "https://iron-harvest.fandom.com/wiki/Bjorn?oldid=5624"
Community content is available under CC-BY-SA unless otherwise noted.