A legendary mech with devastating broadside cannons capable of carrying troops into battle. Piloted by Gunter von Duisburg, a tactician of great renown.

Brunhilde is a unique super-heavy mech produced by the Saxonian Empire. One of the biggest and heaviest mechs ever built, it is the epitome of the Saxonian Empire's military doctrine: heavy armor and lots of firepower. It was first piloted by Gunter von Duisburg during the Great War. After the Great War in 1920, she's being taking care of, upgraded and piloted by Gunter's deceased friend's daughter, Frieda Ruete.

Few words can describe the feeling of seeing this looming "hundred tons of iron" trudging onto the battlefield. She is an inelegant weapon as ignorant of subtlety as her owner, instead invoking a shock-and-awe factor with firepower and the ability to shrug off damage. She walks on four very sturdy legs, three of which must always be planted on the ground to support the weight. Each side of the boxy chassis features three gun ports featuring powerful cannons, and the most powerful cannon is mounted atop the chassis with a 360-degree field of view. Towards the rear is the smoke-stack and a partially exposed engine unit.

Like her owner, Brunehilde is strong in a head-on fight. She starts out with over a thousand health, heavy armor and can fire at opponents on all sides, making her a good line-breaker unit to head an assault if properly supported. She is not invincible, but about as close as a mech can get. She can deal a lot of damage and can devastate enemy units with an artillery shell. Turn her broadsides to face the enemy and watch the enemies get pounded.

Brunhilde's greatest weaknesses are two blind spots, forward and behind, where she cannot fire broadsides and her main turret reloads slowly. Her armor is strong but health-wise far outclassed by most mainline heavy mechs, but this is rectified by her self-repair. She is also expensive to spawn in and takes a long time to repair if incapacitated, so if she falls to concentrated fire the assault will be stalled and care will have to be taken to defend her while she is brought back to fighting condition. She is also incredibly slow and a huge target, so it can be slowly kited and outmaneuvered groups of agile units or taken down by artillery. However, in some situations, this is a boon, as the sheer size of her hull can block otherwise fatal shots.

Her main weapon is a large-bore mortar even larger than the SKS-300 "Kaiser's" cannon but mounted on a turret. She can fire a long-range artillery shot that deals incredible damage. She also has half a dozen broadside-mounted cannons, three on each side, and these can have their fire rate boosted by putting a squad of infantry onboard. 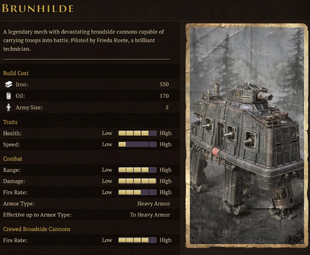 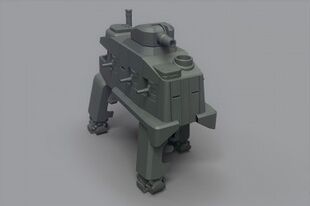 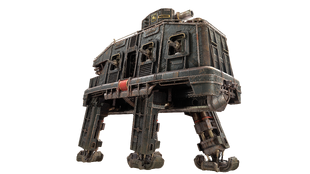 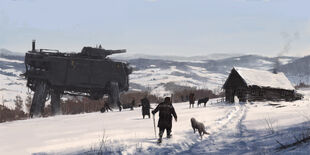