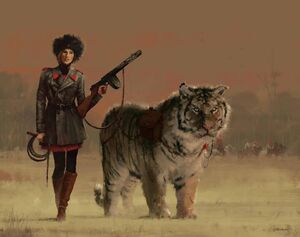 Changa is a hero of the Rusviet Tsardom. A massive female Siberian tiger, she is the constant companion of Olga Romanova. Together they work in the shadows, pouncing when the time is right but otherwise remaining out of sight.

She was gifted as a cub to the young Olga when the girl turned 16, a present from Viktor. Olga brought her along when she enlisted in the Rusviet military.

Little is known about Changa or how she was acquired. However, since Victor is seemingly not Olga's lover in the Iron Harvest arch, she was possibly not a gift from Victor but either from someone else or Olga simply acquired Changa herself somehow.

In 1920, in St. Petersburg during attempted peace talks, a coup broke out preceded by the poisoning of almost the entirety of Olga's loyal guard garrison defending the palace. Changa had been stationed in the guardhouse but either was not poisoned or it had no effect on her, so the rebels were forced to somehow lock her in one of the rooms. Fighting their way through roadblocks and rebels, Olga and her new ally Janek Kos arrived at the guardhouse and Olga immediately ran to find her loyal pet, releasing her which greatly shocked the Polanian lad. Olga, Janek, and Changa fought their way to the palace and dashed inside to find the Tsar, whom they succeeded in rescuing from the burning, weakened building.

Not wanting to draw any attention to herself at the peace celebrations outside the capital, Olga went alone to trail Colonel Zubov, likely leaving Changa to prowl the countryside and wait for her. It is unknown if the big cat accompanied her to Dresden but she would later appear with Olga during Gunter von Duisburg's flight across the Saxony Empire's border. She accompanied her master and Gunter in their march to the Factory.

Changa, being one of the largest and most powerful predators on the planet, uses only her claws and massive teeth in a fight. However, unlike the Polanian bear Wojtek, she works as an ambush predator, much like her owner. She spends most of her time hidden away, waiting for an opportunity to strike or for when her master most needs her.