Clan Albion is a nation and faction in the 1920+ universe.

A lesser power on the world stage, this ancient and dogged nation nonetheless aims to elevate itself to fend off any encroaching powers.

Clan Albion exists as an independent nation; although its form of governance is not specifically stated it is most likely a monarchy. It is an island nation, isolated from mainland Europa by a channel of water. Their symbol is a green, tusked boar, likely a reference to the Celtic-Gaulic symbol of war.

Clan Albion fears that the Factory could fall under permanent control of one of the more powerful factions, which might then encroach on the Albion homeland. With Max by his side, Connor is entrusted with the command of a special task force to build a strong line of defense against the other factions and destroy the Factory before it is too late.

Their military tactics revolve around acquiring and holding territory, strong on the defense and powerful in combat. Once they take territory and plant their flag, they are hard to dislodge. The Albion mech, inspired by bagpipes, is bipedal with a stocky torso, a walking turret with a rotating array of weapons that can be used for attack or defense. It also has the ability to use tunnel territories as a guide to cross rivers, and they can quickly cross great expanses to rally to help endangered workers. 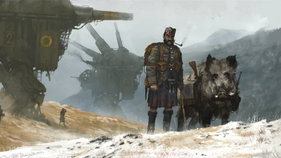 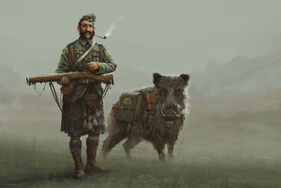 "Back Home" by Jakub Rozalski
Community content is available under CC-BY-SA unless otherwise noted.
Advertisement