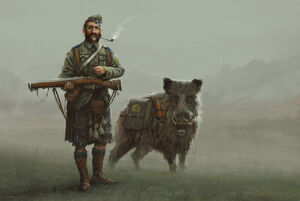 Connor is a highlander, a native of the southern area of the island controlled by Clan Albion. He comes from a long line of military legends, a tradition he perpetuated by entrenching himself far behind enemy lines during the Great War. He owes his life to his faithful companion, a wild boar named Max, who saved him from a pack of dire wolves in the foothills of Saxony.

Clan Albion fears that the Factory could fall under permanent control of one of the more powerful factions, which might then encroach on the Albion homeland. With Max by his side, Connor is entrusted with the command of a special task force to build a strong line of defense against the other factions and destroy the Factory before it’s too late.