The Crimean Khanate is a nation and faction in the 1920+ universe.

Steadfast in their tradition, they struggle to keep up with the evolving technology of the battlefield but maintains their sovereignty with ferocious and swift fighters.

"Their ‘mechs’ are very outdated and still remember the nineteenth century… but their real strength is terrifying cavalry and archers using exploding & poisoned arrows! This faction is full of mysticism, exotics and faith in supernatural powers. I hope you like them, cheers!" - Jakub Rozalski

The Crimean Khanate exists as an independent power, an elective monarchy under a Khan. They are situated along a belt of land by the Black Sea, bordered by the Rusviet Tsardom to the north and the Polania Republic to the west. Their symbol, naturally, is a rearing thoroughbred horse.

Few nations are as true to their old ways as the Khanate, and as such they have enjoyed few of the technological and scientific advancements such as mechs produced by the Factory that have seen the other nations such as the Saxony Empire boom economically and militarily. Almost everyone there can ride a horse or shoot a bow and arrow. However, in light of the world potentially outstripping them and conquering their land, the Khanate seeks to learn about new technologies to keep the pace with any potential aggressors in order to maintain peace.

Crimean military tactics rely on swift cavalry and cunning tactics, making the most of whatever they have at hand and knowing their enemy's weakness to use it against them. The Crimean mech, resembling a giant bicycle/tractor hybrid with legs for propulsion and a cannon turret on top, is pieced together from the scrapyard, as the Crimeans rejected the idea mech technology until it was almost too late. It specializes in traveling long distances and can allow a player to scout and steal an opponent’s combat card before combat begins.

Coercion: Once per turn, one Combat Card can be spent as if it were one resource. 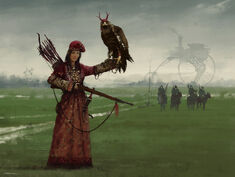 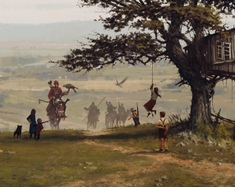 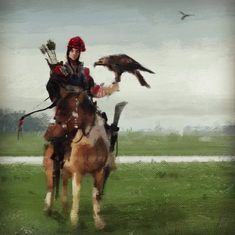