Fenris is a mysterious international seditionist organization and faction in the 1920+ universe.

They are led by Rasputin, and their motives could only be guessed at. Until Nikola Tesla became aware of Fenris with their goals: to destabilize the nations, start wars, and seize more and more power in the chaos; As well as their second attempt to take over the Factory.

Tied to no single entity, the organization works in the shadows and as such little is known about it. The few who discover them, like Nikola, rarely live to tell about it and oppose it. It is comprised of members from, very likely, all the nations of the world. They build power by undermining and destabilizing governments by starting wars, taking advantage of the following political turmoil to install their own members into governments and slowly remove their opponents.

Although not a nation, they do have a small standing military drawn from hand-picked members of all the nations armies, with many of their members being unscrupulous criminals from various places seeking their own power. Their units are powerful, but nothing is stronger than their use of fear and misdirection to weaken their enemies. Rather than a crushing hammer, their forces are like a needle on the right nerve point, a surgical scalpel that, in the right areas, will disrupt the entire body of Europe and possibly the whole world if left unchecked.

Their symbol resembles a gas mask, and their unit colors are orange and black.

There are reports from the countryside of strange soldiers with glowing eyes, but they seem distant and harmless. They are far from harmless, however. When in open combat, their massive bipedal walkers instill fear just by being seen, and back up their terrifying appearance with devastating firepower. Fenris's true strength, however, is to strike fear and spread rumors, forcing enemies to think twice about confronting them or even just moving into any territory where Fenris has just been. They are also harder to contain, able to circumvent blockades and defenses.

It is unknown when this cabal was formed, but likely well before the Great War. Fenris thus remained in hiding until their bold infiltration of the Factory, where their mercenaries seized Nikola Tesla and his daughter Vesna. Despite their discretion, Vesna was able to get out a call for help, enlisting allies among the nations of Europa who came to her aid and extracted her from the factory. This proved to only be a minor setback, for they had a great asset in Tesla who they forced to create machines for them.

During further skirmishes, however, several agents were captured by Vesna's forces who managed to extract Tesla's location. When rescuers arrived, however, Fenris had already moved Tesla somewhere else and left Tesla's newest creation to distract the enemy: their new Annihilator mech, a bipedal terror machine with immense firepower. The allies continued to chase Fenris down, but now the enemy's head loomed from everywhere as did increasing numbers of Annihilators. Eventually, the allies managed to breach the factory and defeat the Fenris forces holding Tesla, freeing him and denying the organization a powerful asset.

However, they are far from done; like the Lernaean Hydra, a many-headed serpent in Greek mythology, where one head is successfully cut off more will sprout elsewhere.

No one knows how long this organization has existed, but it seems to originated long before the Great War. They are currently under the leadership of Grigori Rasputin, although it is unknown if he founded the group or took the mantle of leadership after the previous leader.

Rusviet, likely under the heading of Fenris, attempted to seize The Factory in 1905 but were utterly defeated. In 1920, Nikola Tesla finally learned about the organization and came out of his 15 years of self-isolation to warn the governments of the major Europan powers, including Tsar Nikolaj of the Rusviet Tsardom and Kaiser Friedrich of the Saxony Empire.

In an effort to depose the Tsar, Fenris took advantage of the murmurs of revolution in Rusviet and sent revolutionaries to attack the Tsar's palace in St. Petersburg during the peace talks while having the guarding garrison poisoned. Colonel Lev Zubov defended the palace but secretly aided the revolutionaries by trying to collapse the building with his mech. Despite all this, the Tsar was saved by his Head of Security Olga Morozova and Polanian soldier Janek Kos. Janek was nearly killed in the collapsing building, but Olga had him secretly replace a soldier named Viktor and put him in an advanced exosuit to keep him alive. Shortly after, she managed to infiltrate a Fenris meeting in a castle and overheard their plans.

Another assault on the Factory[]

Still determined to get their hands on Tesla's most powerful prototypes and designs, the organization had managed to get a list of Tesla's previous employees who had left the Factory, including Piotr Kos (under his previous name Dyobowski) and Heinrich Steinmetz. Tracking them to the Polania Republic, Rasputin dispatched Zubov to attempt to make up for his failure in St. Petersburg. He succeeded in catching Piotr and tortured him, getting no information out of him but taking his prosthetic arm and leaving him to bleed to death before being driven away by Piotr's daughter Anna Kos, his brother Lech Kos, and the Polanian resistance.

Zubov then went to Kolno where Steinmetz was rumored to be hiding. When Anna and Lech arrived, the latter started a revolution allowing Zubov to invade the city to look for him. The Saxonian managed to escape in his blimp, unable to be shot down as Fenris needed him alive. The ship crashed just short of the Saxonian border, so Janek and Zubov were able to capture him. Rather than be taken alive, however, Heinrich commited suicide by blowing himself up with a bomb concealed in his fake eye. Uncovering a transponder in Piotr's arm that would let Fenris forces finally invade the factory, Zubov and Janek fought their way in all the way to Tesla's own doorstep. This victory would be short lived, as Anna Kos's Polanian forces arrived and were soon joined by Saxonian rebels under Gunter von Duisburg's command, quickly driving out the Fenris forces and almost capturing Zubov. However, Zubov's attempt to take control of the Factory by force cause the "Icarus Protocol" activated, forcing the alliance of Saxonian, Polanian, and defecting Rusviet troops to stop the three-legged unmanned walker while Zubov fled.

Their failure to capture the Factory forced Fenris to try something else. Stirring up the revolutionaries once more, the murmurs of civil war erupted into all-out fighting across Rusviet. For his safety, Tsar Nicholas was evacuated from St. Petersburg for fear of another, bigger attack on the Palace. Rasputin accompanied him to a secret safe house, but also covertly betrayed its location to the revolutionaries as well as supplying them with weapons and mechs to carry out an assault. Fortunately for the Tsar, Olga returned from the Factory and organized a defense. The Tsar hesitated to believe that Rasputin was the traitor, but decided to return to St. Petersburg to regain control of the situation.

In the Tsar's absence, Zubov was put in charge of the "loyalist" forces in the capital, who proceeded to raid and pillage the civilian population to destroy the Tsar's already-damaged image in the eyes of the people. Olga, the Tsar, and their loyal forces managed to steal a boat and sail into the St. Petersburg harbor, but lacked the forces to take on the significant loyalist garrison. Defending a radio tower, the Tsar attempted to get out a broadcast to the people to expose Fenris and unite the nation once more, but Rasputin and his agents laid in wait and executed the Tsar when he entered the building alone. Hijacking the broadcast, Rasputin formally announced the revolution's victory and the surrender of the loyalists under Zubov. This put Olga and her forces in full retreat, and Fenris in full control of one of the most powerful and largest nations of Europa.

While the alliance of the three armies, the Polanian resistance, Saxonian rebels, and Rusviet defectors still maintain a hold of the Factory, Fenris has become emboldened with the full might of the Rusviet military at their disposal. 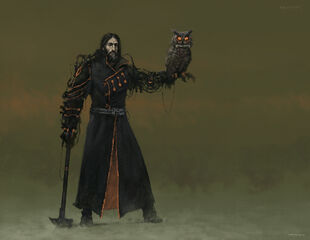 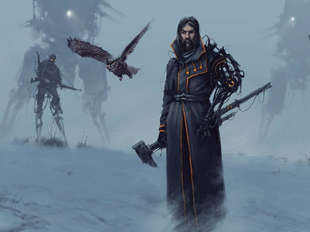 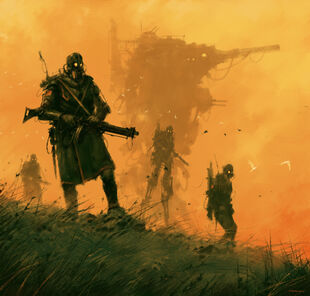 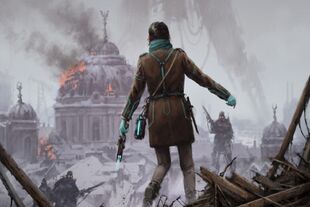 "Rise of Fenris" by Jakub Rozalski 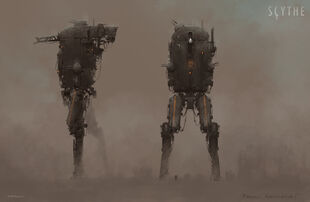 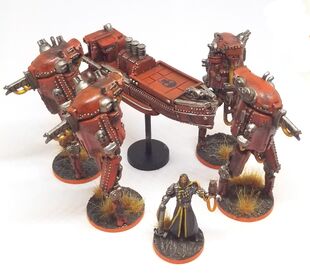 The Fenris Army from Scythe.