Frieda Ruete is a hero from the Saxony Empire. A skilled mechanic, she takes care of and pilots Gunter von Duisburg's heavy mech Brunhilde.

Frieda is an averagely built young woman with dark brown hair; her face always darkened with soot and grime from her work as an automachine technician. She wears a black mechanic's jumpsuit with leather gloves, a bandanna around her head, dark welding goggles, and black leather shoes over red woolen socks. She also wears a pair of darkened spectacles (to shield her eyes when welding) and an orange scarf.

Frieda was born to Karl, a close friend of Gunter von Duisburg. He taught her to maintain, fix, and improve mechs. After the war, Gunter entrusted him with the care of Brunhilde, and Karl in turn showed his daughter how to work on the machine.

Karl served in the Great War, being one of the first into the fray and as such he suffered from shellshock. He exhibited horrible shaking and flashbacks, for which he was mocked as a disgrace to the Fatherland. Despite Frieda's attempts to comfort him and pleas to ignore the others, he committed suicide after leaving a tearful note for his daughter. Heartbroken, Frieda continued to care for and upgrade Brunhilde in her father's barn.

Enemy of the State[]

One night, she was working on Brunhilde as she often did when Gunter arrived to collect the machine, not expecting to be greeted by Karl's daughter instead of his friend. Before he could protest or explain what was going on, she piloted the mech out of the barn and and proceeded to use the machine to kill a number of Imperial stormtroopers who arrived to kill Gunter. Learning that he was an enemy of the state, and now being one herself, she accompanied Gunter while getting Brunhilde back up to fighting capability. The machine suffered a temporary breakdown while the two were out rescuing civilians loyal to Gunter, forcing the commander to go get oil to repair it. By the time they reached the border, she had gotten Brunhilde's mortar back online and could now repair the machine from inside so long as she left it standing still. They narrowly survived a pursuit lead by Prince Wilhelm himself, and together they held a twisting mountain pass to buy time for a civilian caravan to escape. On Olga Morozova's advice, they proceeded to The Factory where they would be safe.

Upon arrival, however, not only had the Factory been breached by the Rusviets but the Polania Republic's forces were there trying and failing to gain ground. With Brunhilde's firepower and Gunter's tactics, as well as rescuing Anna Kos, the newly allied forces fought their way in. Shortly after the "Icarus Protocol" was activated, forcing Frieda, Gunter, the Polanians and the Rusviets to fight together to defeat the monstrous machine. With the Factory now under their control, Frieda got right to work helping to rebuild the defenses.

Some time later, Tesla arranged for Gunter to travel to Arabia to speak to their king to offer support in the form of mechs, weapons, and training in order to oust their Saxony Empire's occupying force, specifically to prevent their control of Arabia's resources. Bringing Brunhilde along, Gunter naturally brought Frieda with him to tend the machine, as well as Polanian cavalryman Michal Sikorski.

Unfortunately, Tesla's communications had been intercepted by the king's self-serving brother, Khalid who, preferring to work with Saxony, had his brother and two nephews murdered, seizing the throne for himself. Once Frieda and the others arrived and before they could learn what had happened, Khalid's men arrested them, threw them in prison under heavy guard, and confiscated Brunhilde.

Their luck turned for the better when Princess Sita, Khalid's niece and opponent fighting for Arabia's independence, along with Usonian military officer William Mason, broke Frieda, Gunter, and Michal out, and Frieda took control of Brunhilde once more. This firepower proved very important in their campaign to free the nation along with the aid of Usonian airships. However, when they liberated the Saxony-held city of Aqaba, Khalid's forces along with those of Mason's superior (and father) captured them once again. Yet again, Mason, unwilling to let his friends down, rescued them from prison and with Frieda at the helm used Brunhilde to storm the prison where Sita was held, as well as holding the line against a Saxony counterattack.

After William and his forces left, Frieda stayed along with Gunter and Michal to support Sita in her fight, and offered to send some of her people to Tesla's factory to be taught valuable mechanical skills to take home.

Field Repairs: Frieda can repair Brunhilde from inside it when the mech is sitting still. Although Frieda is behind this, in Campaign and Multiplayer her ability is folded into Brunhilde's abilities. 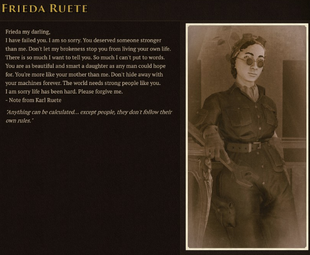