The Great War was a devastating international conflict which took place from 1915-1920 in the 1920+ universe, paralleling World War I (which we also call the Great War) in our timeline with some differences. The war to end all wars, it saw previously unheard-of levels of destruction and untold loss of human lives.

It is worth noting that compared to Iron Harvest in Scythe the length of the war itself, when it started or ended, are unknown, but it was as devastating as it was world-changing. Entire cities were leveled, the populations of all the countries involved were more than decimated, and the very landscape would never be the same again. Not only were massive armies pitched against eachother, but advances in artillery, armor, explosives, and fully-automatic weapons like heavy machine guns wreaked immense losses. Worst of all, however, were the auto-machines; mechs, which each country produced and weaponized, brought perhaps the greatest changes, ones still seen and felt after the war.

In the aftermath of the war, wreckages of mechs, other vehicles, twisted lengths of barbed wires, and many lost souls still litter the landscape, and the process of salvaging these resources became known as the "Iron Harvest."

The war was the culmination of national tensions and desire for expansion for the great powers. Little did their respective governments known, however, that they were being manipulated by an unseen force working in the background to spark conflict and seize power in the process.

In 1915, the assassination of a Saxony archduke finally lit the powder keg waiting to blow, and the nations went to war one after the other. Their armies of men and conventional weapons were bolstered by automachines, mechanical walkers of all shapes and sizes wielding weapons from machine guns and flamethrowers to earth-shatter cannons and missiles. These mechs wiped out hundreds of men at a time, leading to many millions of casualties. Despite all the deaths, much of the war was a seemingly meaningless push and pull as the sides fought and paid dearly to take ground only to lose it shortly after, and the cycle would repeat itself as the terrain itself was rendered unrecognizable.

Despite the carnage, more and more men were pulled from reserves and thrown into the meat grinder, encouraged and indoctrinated with propaganda, promises of adventure, and assurances that their side was the right one.

Finally, in 1920, the powers agreed to a ceasefire, bringing an end to the needless carnage. This had consequences of its own: many citizens of all statures in these countries were furious, seeing this as a blow to national pride and their honor. Members of the Saxony Empire in particular, seeing expansion and conquest as their birthright and certain that victory was near only to be thrown away, were dissatisfied with the unfavorable conditions of surrender. The nations were left economically devastated as well. Rumors of revolution are in the air and drastic change is likely on the horizon.

Now forces working from the shadows aim to take advantage of the hostile sentiments to once again push the nations to war, a war that would possibly make the Great War pale in comparison as all sides push to bolster their technological prowess and military strength. 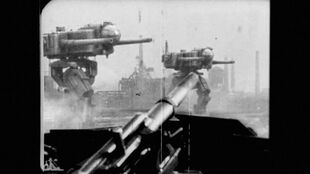