"You suggest we wage an unnecessary war as a distraction?"

"In that case, it wouldn't be unnecessary, now would it?"

- Grigori to Olga on continuing the Great War -

Grigori Rasputin is a high-ranking member of the Rusviet Tsardom. A confidante to Tsar Nikolaj, he seeks to wrest power away from him by way of rebellion to further a different agenda.

Grigori is a man of surprising charisma and yet simultaneously repulsive in a way few can describe. He has a full black beard, mustache, sideburns, and hair. He dresses simply, wears a black robe with a dark red sash. He wears a crucifix around his neck which he tucks into a chest pocket. Some who have seen him describe him as have unnerving eyes and a strange smell.

In Scythe, his appearance is quite different and much more intimidating. He wears a similar black robe, but with orange trim, a tall collar, buttons, and his left arm being entirely mechanical while his hair is noticeably more disheveled. He carries a sledgehammer as his weapon.

In the aftermath of the Great War, Grigori was a close advisor to the Tsar and privy to many national secrets. Unknown to the Tsar, however, he was in charge of a shadowy, international cabal called Fenris. His goal and that of Fenris was to undermine and destabilize not just Rusviet but all the great nations of Europe in order to seize more power. He also is rumored to be having an illicit affair with the Tsarina.

In the latest stage of the Great War, the Tsar held peace talks at his palace in St. Petersburg. He ordered Colonel Lev Aleksey Zubov, a Fenris member inside the Rusviet military, to carry out an attack on the summit using revolutionaries already keen on killing the Tsar. He also had all the troops stationed in the barracks poisoned.

The attack nearly succeeded were it not for the intervention of Olga Morozova, Rusviet's head of security, Janek Kos, a soldier from the Polania Republic, and forces sent by Nikola Tesla to foil the coup. Grigori recommended abandoning the peace talks with Polania and the Saxony Empire on account of internal political strife which he claimed was much greater a threat. He advised that it was best to unite the people against an external enemy lest they "start creating new ones." Despite this, Rusviet signed a peace treaty with Saxony although tensions between Rusviet and Polania would continue for some time. Tesla, well aware of Fenris, also fed information to the Tsar about the organization.

During the peace celebrations, Rasputin called a secret Fenris meeting in a castle outside of St. Petersburg, but Olga managed to infiltrate this meeting and overheard not only their failed plan to kill the Tsar but a plan to capture Heinrich Steinmetz, a former Tesla employee, and to kill Kaiser Friedrich. He belittled Zubov for his failure but sent him to Saxony to recover Steinmetz. Staying in St. Petersburg, he waited for Zubov's success in breaching the Factory while continuing to undermine the Tsar.

While Zubov's forces narrowly failed to conquer the Factory, Rasputin enacted another plan in order to advance the organization's agenda, By stirring up the revolutionaries, civil war finally erupted across the country. He was careful to shield the Tsar from the realities of the situation, allowing Fenris-aligned "loyalist" troops under Zubov to execute brutal raids on the civilian population, kidnapping their sons as conscripts, seizing food and supplies, and executing anyone who resisted. As planned, this further damaged the Tsar's position in the eyes of the people. energizing the revolutionaries. He also made sure to pin the unsanctioned military strike on the Factory as a betrayal on Zubov's part.

Soon, the situation degraded and Rasputin had the Tsar evacuated for his own safety to a secret safe house, although he relayed its location to the revolutionaries and supplied them with weapons before discretely leaving. Fortunately, Olga returned from the Factory and thwarted the attack, alerting the Tsar that this was Rasputin's and Fenris' doing. The Tsar decided to return to the capital to confront Rasputin, stealing a boat with Olga to do so.

Landing in the harbor, the Tsar knew that the so-called loyalist forces under Rasputin and Zubov were too powerful to overwhelm and regain control, so he went to a radio tower with the plan to release a broadcast calling for unity and exposing Fenris. Counting on this, however, Rasputin laid in wait within the building and, when the Tsar entered alone, he executed his once-ruler and hijacked the broadcast to announce the victory of the revolution with Nicholas' death. This crushed any hope the alliance had of gaining the full support of Rusviet, and Olga retreated with her meagre forces.

While thus far he is still not in control of the Factory or the Saxony Empire, rest assured he likely continues to scheme, and even with heroes of Rusviet, Polania, and Saxony united against him he will likely not make it easy for them to overthrow Fenris, particularly while in control of one of the strongest Europan powers. 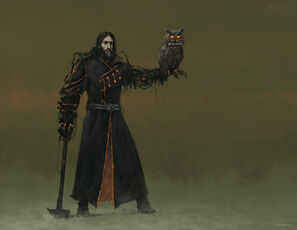 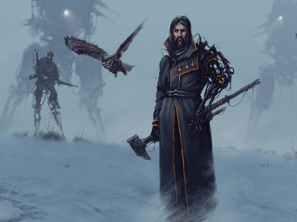 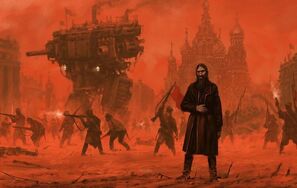 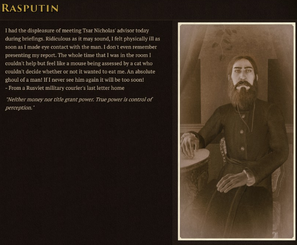 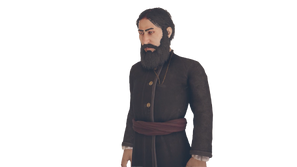