The Gunship, like all aircraft was added in the Operation Eagle Expansion. The Gunship is a common aircraft unit for all factions.

An airship built around a Destroyer Cannon for close air support of ground forces and a HMG soldier inside the coupola for limited AA capability. It seems like it can have a decent sized crew aboard the Gunship. It is supported by multiple medium sized balloons barely keeping it airborne. There is a railed observation deck on the top so they can spot enemies the front can't see. With almost no space for the cannon to move up and down, the gunship has to go very close to the target. If it were to shoot forward then the recoil would cause some real problems with Gunship. This means that it is almost inevitable that it will take incoming enemy fire. It is recommended that it is supported by [1] Skybike aircraft to draw fire. While the Skybikes are drawing fire the Gunship can go for the enemies strongest mechs. The artillery on the Gunship does huge damage even to heavy armor mechs. There is pretty good AOE, much like the SLL 33 "Erlkönig", so if there are any infantry around they will be affected. They can be taken down easily by missiles and the Polanian Heavy Machine Gun. So it is better if you send units in before it so you know what the Gunship is up against. Use the gunship as a heavy mech destroyer and cleanup airship. But it can also be a high destruction linebreaker.

The Gunship is very strong at the cost of the speed. It can be flanked easily and when ordered to retreat it takes a moment for it to stop and turn the other direction. This makes it a sitting duck while it turns. Its gun also reloads very slow, giving the enemy a chance to get out of the way before it attacks. With the amount of resources it needs it is a mid-late game unit. The Gunship needs a lot of protection and support too. Every unit can attack it with their weapon so they are not indestructible in the air. 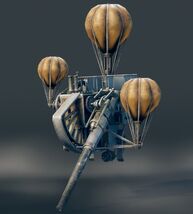 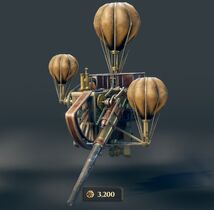 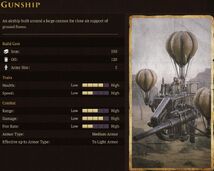