Heinrich Steinmetz is a Saxonian engineer, inventor and pilot. He appears as an important NPC in the Polanian "The Price of Freedom" and Saxon "The War to End All Wars" campaigns of Iron Harvest.

Heinrich is an older man of standard height and build, standing with a slight stoop. He has a white beard but no mustache and is almost completely bald under his brown leather aviator helmet. He is seemingly missing his right eye, and wears an advanced mechanical one attached to his head. He wears a simple black coat, dirty grey coveralls, one of the legs of which is not properly tucked into his leather boots.

At some point in his life, Heinrich took up work at Nikola Tesla's Factory along with many other inventors and scientists. There, he became friends with Piotr Dybowski. At some point either during or prior to this work, he may have lost his right eye or simply decided to get a mechanical enhancement for it.

In 1905 he survived a Rusviet attack on the Factory, which ultimately failed but claimed the life of Piotr's wife, leading Piotr to leave the factory with his two children. Heinrich himself would leave at a later date when Tesla, paranoid that someday an outside force would break into the factory, created the "Icarus Protocol" that would prevent anyone stealing his technology.

By this point Heinrich gained the notice of the Saxony Empire's secret police, who saw him as a valuable asset that could be put to good use as a country always seeking a scientific or technological advantage due to his working for Tesla. They kept him under observation for some time, searching his mail in hopes of finding other people with links to Tesla. Eventually he was captured and forced to work on an experimental long-range missile program capable of hitting the Rusviet capital of St. Petersburg, but he later escaped across the border.

Now a free man, he went to live in the Polania Republic, settling in Kolno and constructing a large workshop to pursue his interests in airship design.

In 1920, an organization known as Fenris began to hunt down Tesla employees in search of a way to breach the Factory's defenses, namely Piotr and Heinrich. Tracking him down to Kolno, their Rusviet operative Colonel Zubov blockaded the city but could not invade the city to search for him due to the peace treaty. Polanian resistance heroes Anna and Lech Kos, daughter and brother of Piotr, breached the blockade to bring supplies to the civilians, and Heinrich watched their arrival from the shadows. The latter then started an armed uprising to bring the Rusviet hammer down on the city in hopes of finally inspiring Polania to drive out the Rusviet occupation force. Anna, having no part of this, subdued her uncle just as Heinrich came to help her. Together, they gathered any citizens they could find into his workshop and they boarded a new inflatable Airship of his own design. However, Rusviet cannons prevented the ship from taking off, so Anna went to silence the guns. Zubov captured her, however; learning Steinmetz was aboard he ordered the guns to cease their fire and the ship fled the city's airspace.

Heinrich made to fly the blimp all the way to the Saxony Empire border. For unknown reasons, the ship crashed near Książ Castle, although no one was killed. While hiding in the castle, the Rusviets overwhelmed the nearby Saxonian military base and Heinrich attempted to escape through a secret passage but was captured. Despite interrogation, he was not forthcoming much useful information, and told Janek that he was unable to get the lad out of his life-support exosuit as the technology was "after (his) time." He explained that a transponder was needed to get past the Factory defenses, but rather than be taken to Rusviet and tortured he refused to give up his own and committed suicide by blowing himself up with a bomb installed in his mechanical eye. 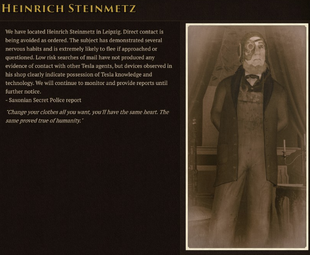