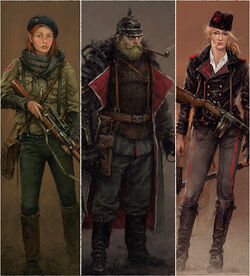 Heroes in Iron Harvest are not unstoppable "super units" but units with special abilities that give additional options in combat. All twelve heroes are available in multiplayer and skirmish matches as well. Heroes level up over the course of a campaign, and with each level-up, players can give them a new skill or level up an existing skill, some of them active, some passive.

The first four heroes are: Anna, a Polania girl who becomes a capable sniper and symbol of resistance; Gunter, an experience warrior and legendary commander; Olga, a Rusviet spy who operates in the shadows and is close to the Tsar, and last but not least, William Mason, Usonia's "best man" that leads his troops to battle in his advanced exosuit.

Some heroes have pets they can control in battle like Anna’s bear Wojtek, Gunter’s dire wolves Nacht and Tag or Olga’s tiger Changa. Others have unique mechs or weapons at their disposal, or have unique abilities, such as "The Cavalry"

The game Scythe included other heroes who may eventually be included in Iron Harvest, should their factions be introduced: