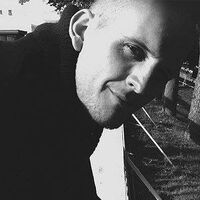 Jakub Różalski (aka "Mr. Werewolf") is a Polish artist, best known for creating the World of 1920+. Born in 1981, in Koszalin, he has professionally worked as a concept artist, illustrator, and designer since 2002.[1]

Jakub was born on the Polish West Coast and grew up in a rural village surrounded by forests and lakes. He loved drawing and painting for as long as he could remember and had always been interested in fantasy and science fiction. He studied fine arts, however would say that he's self-taught. He always read a lot of books, watched a lot of movies, and was exposed to art books and Old Masters paintings. This helped shape him as an artist.

In 2014, after the first article about his work was published on Kotaku, he received a lot of offers and proposals. He was approached by Jamey Stegmaier, founder, game designer, and CEO at Stonemaier Games. He asked if Jakub would like to create a board game set in the world of 1920+ based on his art. From that pairing came the game Scythe. Later he would be offered the opportunity to work on a video game based on his world, which became Iron Harvest.[2]