- To Gunter in "For Kaiser and Country"

Kaiser Friedrich III of Saxony was the ruler of the Saxony Empire. His son is Prince Wilhelm, and he was a close friend to Gunter von Duisburg.

Friedrich was a short, older man of very stocky, dwarf-like stature. His skin was pale, and his balding grey hair is accompanied by well-maintained sideburns and a thick mustache. He wore regal a blue military service jacket adorned with decorations such as golden epaulettes. He wore white pants with a red stripe, knee-high polished black leather boots, white gloves, and carried a cane although he could walk without it.

Born into a line of Saxonian emperors, Friedrich rose to the throne some time before 1900. He served in the military academy alongside Gunter von Duisburg, and they would become good friends for a long time. He would have a son with an unknown woman, naming him Wilhelm.

With the outbreak of the Great War in the winter of 1915, Friedrich sent Gunter to lead his forces on an offensive into the Polanian Republic, and when Wilhelm decided to also join the war his father made sure to have Gunter keep the young heir close so nothing would happen to him. The opening offensive, anticipated to be swift and a decisive victory, resulted in years of bleeding reserves and drawn-out trench warfare stalemates. Despite the horrendous casualties and massive economical strain suffered by Saxony's armies, wartime propaganda kept the public convinced that victory was certain and growing nearer.

In 1919, while on an offensive, Wilhelm, who at that point had become unstable from his experiences, was nearly killed in a Rusviet ambush and suffered heavy losses. Snapping, he gunned down a number of POWs, forcing Gunter to knock him unconscious. The old commander tried to expose the Prince's actions, but Friedrich, in interests of preserving the monarchy from such a scandal, made Gunter out to be a liar so his son could save face. This drove a significant wedge between the old comrades, with Gunter resigning in humiliation to return home and hunt birds with his wolves.

In 1920, Friedrich entered peace talks with Tsar Nicholas of Rusviet, his cousin, Polanian leaders, and the heads of the other major countries to end the war. Despite an attempt on the Tsar's life, the talks succeeded and both Rusviet and Saxony agreed to a ceasefire.

Friedrich's push for peace, however, had consequences. He had long been seen as growing weaker and weaker in the eyes of nobles and citizens alike, and this humiliating admission of defeat dealt a heavy blow to national pride. In particular, this put him at odds with Wilhelm, who believed Saxony would not be safe until all the Empire's enemies were wiped out, a sentiment shared by many nobles and friends to Wilhelm.

Soon after the failed attempt on the Tsar's life, Friedrich and almost every world leader received letters from Nikola Tesla, who had come out of hiding after 15 years to warn them about the threat of Fenris. This underground seditionist organization sought to reignite the war and seize control of the Europan nations in the process, and Tesla warned that Friedrich's life was also in danger.

With this news, as well as a confirming report from Rusviet spy Olga Morozova who had infiltrated a Fenris meeting, Friedrich sent word to Gunter asking him to come to the palace in Dresden. Reluctantly, Gunter arrived, but still embittered from the scandal he initially refused to listen. That night, however, Gunter could not sleep, and joined the Kaiser in the palace garden alone. They had a more earnest, friendly chat, reminiscing on old memories. Gunter was almost about to agree to investigate the Fenris matter when tragedy struck: Wilhelm, taking Gunter's handcannon from his room, shot and killed the Kaiser. Pinning the murder on Gunter, Wilhelm used the event to take power for himself and hunt down Gunter and anyone else who would oppose him.

Gunter was put on the run, but managed to rally thousands of Saxonians (both civilians and combat veterans) loyal/friendly to him and Friedrich to his side and led them to Tesla's Factory where they would be safe from Wilhelm. 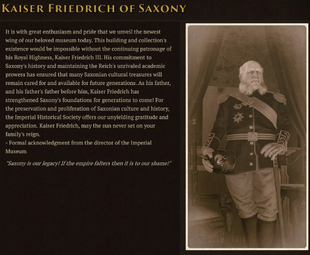 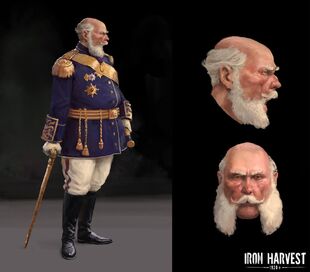 "Foundations of the Empire" by Jakub Rozalski