Death from Above (Ability)

An unscrupulous colonel with a hidden agenda. Can dispatch foes with his blades and cannons while remaining mobile with his rocket jump.

Colonel Lev Alekseevich Zubov is a hero for the Rusviet Tsardom who moonlights as a field agent for the Fenris organization. A ruthless and effective commander, he pilots a state-of-the-art heavy melee mech focused on mobility. He appears as a main antagonist in "The Price of Freedom" and a playable unit in "A Shadow over Europa."

Zubov is a tall man of standard build, with a goatee, mustache, pronounced eyebrows, and balding dark hair under a kubanka-style hat decorated with gold chains. His grey, red-trimmed military great coat is no less decorated with medals, and he sometimes wears a red cape. He has a goatee, a mustache, dark hair and eyes, with a prominent mole to the right of his nose.

His mech strongly resembles the keel section of a huge ship having been given a pair of sturdy, although short, legs, and two immense and long arms tipped with what appear to be serrated, scaled-up lawnmower blades. On each shoulder is a magazine fed heavy cannon, and built into the mech's back is a large rocket engine.

Lev and his mech have incredible mobility for a heavy mech unit, being quite fast on foot and possessing of a rocket ability that allows for quick escapes or sudden and devastating ambushes. His spinning blades do very heavy damage in close quarters, and these attacks also repair a bit of any damage the Colonel may have suffered. This all makes him the bane of groups of lighter units, as they cannot damage him quickly thanks to his heavy armor while he cuts them to pieces and simply refills his health.

Lev's main weakness is his relatively thin armor; being countered by tough anti-mech units and field cannons means cannot replenish his health fast enough to cancel out the damage from these weapons. Being hit by the PZM-11 "Lowca's" Sting ability is particularly devastating, especially from behind as, like most mechs, he also takes more damage from the rear. Getting surrounded means he should beat a hasty retreat.

Zubov was born into the Rusviet aristocracy, using his status to rise in the pecking order. He enlisted in the Rusviet military at some point, establishing a reputation as a very effective commander, although almost universally regarded as "an asshole." It was likely through his connections that he ended up joining Fenris, who in turn for his service helped him rise in the ranks to the rank of Colonel.

Zubov served the Rusviets in the Great War until peace talks commenced in St. Petersburg. He attended the talks along with Polania Republic and Saxony Empire representatives. Just then, revolutionaries attacked the peace talks with the aim of killing Tsar Nicholas. Unknown to everyone else, Zubov himself was part of this plan, as he had the guard barracks personnel poisoned in advance and misdirected the scattered guards. He defended the palace from waves of revolutionaries as well as advanced mechanized troops sent by Nikola Tesla to intervene in his plans. Zubov and his forces managed to fend off these forces and capture one of Tesla's advanced exosuits. He then tried to level the burning building with the Tsar inside, and although this failed to kill the Tsar he was not exposed.

Using tech scavenged from the exosuit which he had sent to a lab, he oversaw testing for the prototype exosuit wielded by Victor Popov (secretly known as Janek Kos) allowing the confused and mutilated soldier to escape and wreak havoc as a demonstration of the suit's capabilities.

Attending a peace celebration, he snuck away to a Fenris meeting in a castle outside of St. Petersburg. Little did he know that Olga Morozova had tailed him there, long suspecting of his role in Fenris. During the meeting, he was demeaned for his failed coup, but given new orders to go to the Polania Republic and capture Piotr Dybowski and Heinrich Steinmetz, key elements in Fenris' plan to capture Nikola Tesla's Factory.

His first search for Steinmetz was near the Saxony Empire and Polania Republic border, ordering a tavern burned down with everyone to cover his tracks and blaming it on the Polanian resistance, much to Janek's hidden fury. They then attacked a Saxonian military base where missile tests were being done and where Steinmetz was reported to be. Although he did not find the scientist, he did learn of his location in Polania as well as that of Piotr Dybowski, now Piotr Kos.

Arriving in Polania, he ordered a blockade of the city of Kolno where Steinmetz was hiding, utilizing this to tempt the Polanian resistance into fighting back. He personally took troops to Piotr's village in Zalesie, ransacking it and eventually capturing the professor despite his daughter Anna's best efforts to fight them off. Zubov took Piotr to a nearby train station that would take them back to Rusviet and tortured him for information, ripping off his mechanical arm in the process. Piotr, however, refused to cooperate. An assault from Anna seized the train station and held off waves of attacks from Zubov's troops, forcing the colonel to personally lead the charge. He would have likely succeeded in crushing Anna's beleaguered forces were it not for Lech Kos intervening with the Polanian resistance, driving him away. Taking Piotr's arm with him, he returned to Kolno.

When Lech and Anna arrived, the former started an armed uprising in the city, unwittingly playing into Zubov's and Fenris' plan to reignite the war between Rusviet and Polania. While Anna tried to evacuate civilians by Steinmetz's airship, she was captured by Zubov. Lech came to the rescue and personally engaged Zubov in a pitched mech-on-mech battle, almost gaining the upper hand but was overwhelmed and captured. He personally executed Lech with his revolver, but before he could shoot Anna he was driven off by a cavalry charge lead by Michal Sikorski.

The Polanians proceeded to dismantle all of Zubov's fortifications, routed his forces, and very nearly captured the Colonel at gunpoint although he once again used his mech's rocket jump to escape. This lead to him being stuck on his back, saved by the timely arrival of Janek.

Assault on the Factory[]

Reuniting with Janek, they tracked down Steinmetz's airship which crashed just short of the Saxonian border. The two overpowered a nearby military base, stormed a castle where the engineer was hiding, and captured him when he tried to flee through a hidden tunnel. Steinmetz refused to give any real information, instead blowing himself up with a bomb hidden in his mechanical eye and nearly killing the Colonel were it not for Janek.

Zubov then realized the key to the Factory was Piotr's mechanical arm, or, more importantly, its transponder. Fitting it to Janek's suit, the two assaulted the Factory, shut down its defenses, and defeated the city's defense force. Forcing his way into the inner sanctum, Zubov finally found his goal: Tesla himself. Before he could attempt to take the inventor back to Rusviet, however, Janek revealed his true colors and attacked the Colonel who disabled him with a remote. The arrival of Gunter von Duisburg, Olga, Anna, as well as his having unwittingly activated Tesla's "Icarus Protocol", forced Zubov to flee once again, abandoning his troops to their fate which would see most of them defect to Gunter, Olga, and Anna's side.

Following his failed attempt to take the Factory, in order to cover Fenris's tracks from the Tsar's investigation Zubov was blamed as a renegade by Rasputin, who told the Tsar the colonel had undertaken the unsanctioned attack alone. However, despite being made aware of the consequences of failure the last time, he was given another chance given his valuable role as a man in the Rusviet military. Rasputin set into motion a full-blown revolution that rocked the nation, and using Zubov's remaining loyal forces posing as Tsar loyalists had them raid the civilian population and kidnap new recruits, turning the people even more against the monarchy.

When Rasputin himself ultimately murdered the Tsar, Zubov, still posing as a loyalist, took charge of the Rusviet military in "surrendering" to the revolutionaries, putting the entire Tsardom's war machine into the dangerous hands of Fenris.

His whereabouts are currently unknown, but likely as not he and Fenris continue to plan and scheme in the increasingly unstable landscape of Europa.

Lev himself carries a revolver, and has often used it, but his primary weapon is his mech.

His mech's main weapons are a pair of spinning blades not unlike those on a lawnmower, effective against all forms of armor. The cannons on his shoulders can fire in all directions, dealing good splash and knockdown damage to infantry although not so much to mechs and they reload slowly. Finally, using the rocket booster built into the machine's back, Lev's mech itself becomes a weapon, performing a cannonball-style dive and crashing down to deal damage in an area. 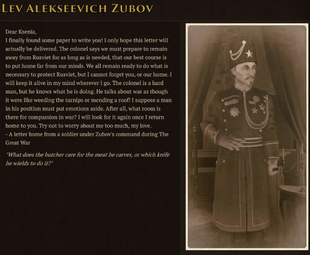 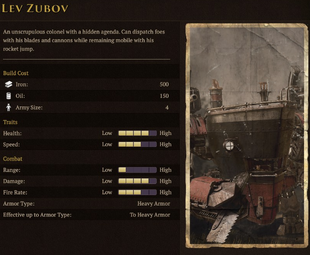 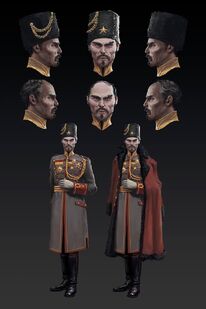 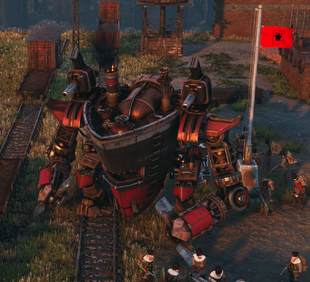 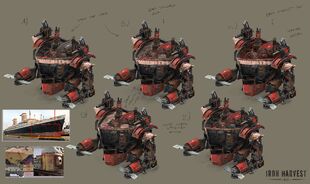