"A large melee-focused mech that becomes more powerful as it comes under fire."

The M-22 "Stark" is a medium mech unit produced by Usonia. Fairly fast and equipped with both a massive jackhammer and a flamethrower, it can wreak havoc on infantry and mechs in close-quarters.

Charging at the head of a Usonian force, the Stark is a fierce and menacing prescence in battle. It is built with resemblance to a North American Bison, with a sturdy, boxy, and humped chassis carried on four legs with a pair of horns and grill at the front somewhat resembling a head. To the left of the head is a swiveling flamethrower unit, but on the righthand side is easily most noticeable part: a massive pneumatic jackhammer designed to punch through the thickest armor the enemy can only hope to hide behind. Its engine is located at the back with a set of exhaust tubes trailing thick smoke as it barrels madly at the enemy.

Fitting its strong visual resemblance to the Bison, the Stark is relatively mobile for its size and very dangerous at close range. Its flamethrower that has a devastating area-effect against infantry, and its medium armor lets it mostly ignore anything infantry can throw at it. Its jackhammer-like chisel can deal immense damage to any type of ground unit, particularly mechs. The more the enemy fights back, the more furious the Stark's onslaught becomes as its damage steadily increases the more it takes damage.

As is the case with most melee mechs, however, the Stark does suffer at range and as such cannot protect itself from air units. Having only medium armor, it cannot blunt artillery and field cannon attacks as well as heavier mechs, and thus should either come with ample support or carry out carefully planned ambushes to maximize its damage output against a larger force. 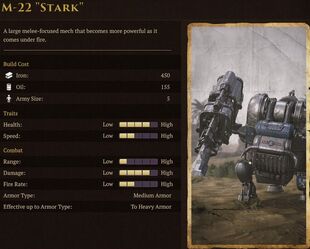 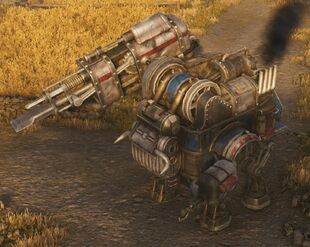