A stealthy artillery mech using the element of surprise to inflict heavy damage.

The M-8 "Attucks" Hornet is an artillery mech produced by Usonia. Sneaky and armed with a trio of mortars, it can surprise enemies by appearing out of nowhere and firing a hard-hitting barrage.

Built low to the ground, the chassis of this mech is built around a low profile and ease of concealment. Its substantial armament of three large-bore howitzers can all fold down into the box-like body and can then be covered with a pair of panels. The sheer diminutive size of this mech, and what looks to be its cabin on the side imply that the M-8 is an incredibly uncomfortable assignment.

The Attucks is a unique artillery unit somewhere between the cannon-based mechs used by Polania and Saxony, but is an AOE-focused, salvo-based piece instead of firing one shell at a time. Its barrage thus has very good AOE and does heavy explosive damage to anything caught in the blast, and with the ability to hide until the time is right, it can strike from where it is least expected to deal maximum damage and disrupt their forces greatly. It can also be used behind friendly lines to shell oncoming enemy forces if defending an area, making them pay dearly for every inch they take.

Due to its unexceptional range and low firerate, it is generally less effective in massed barrage attacks compared to the Erlkönig or Nakovalnya. This unit's reliance on stealth and surprise attacks means it usually benefits from more sparing use. Shells from this unit tend to travel slowly despite a huge damage area - they do the most when enemies are not prepared and especially if they are not moving quickly in a single direction.

Care should be taken to keep it protected; it has only light armor, a slow rate of fire, and as with other artillery pieces it has a significant area near it where it cannot fire, so enemies that get close can tear it to pieces. If set to ambush, plan accordingly so that it can escape unharmed or have forces ready to rush to its defense.

The Attucks comes with a trio of howitzers which fire at a high angle to arch over cover and blanket the area around its target with ordinance.

Stealth (Passive): Covering itself with a special canopy, the Attucks can become invisible to enemy units until it fires or hostiles come too close.

Rapid Insertion (Active, requires Veteran/higher): A paratrooper squad quickly lands next to the Attucks. Basically identical to the ability of fully-upgraded Usonian Bunkers. These troops are practically identical to Volunteers. A commander using this ability is basically trading the convenience of immediate troops with a premium cost to do so. Useful for defending Attucks or keeping up an offensive, but a very expensive option. 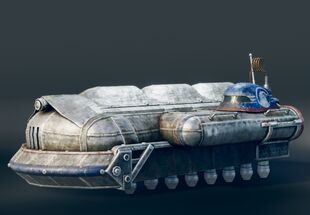 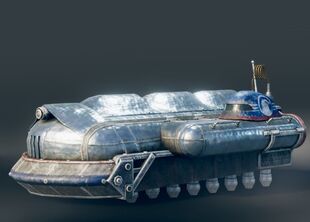 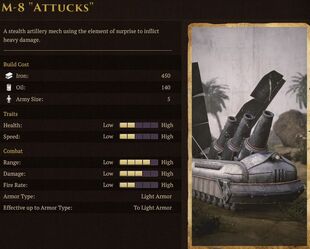 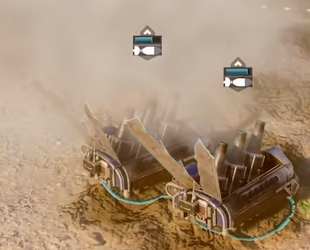 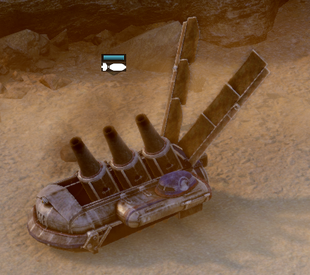 "Attucks" with it's guns exposed 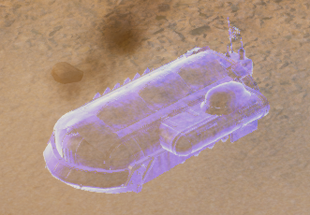 Stealthed Attucks, as seen by it's team 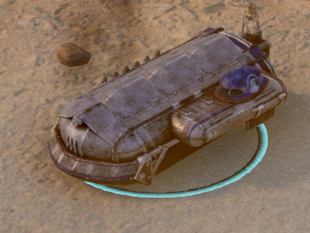 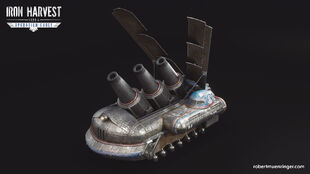 A render of "Attucks" with it's guns exposed 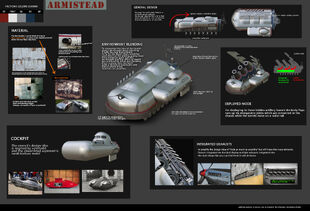