An advanced Saxonian invention that can launch autonomous explosives at enemies from a distance.

The MWF-28 "Stiefmutter" is a specialized light mech produced by the Saxony Empire. A symbol of Saxon engineering prowess, it launches remote-controlled explosives to attack entrenched and exposed enemies alike from a distance.

The MWF-28 "Stiefmutter", a bizarre construct that deploys guided mono-cycles against armored enemy targets, which explode on impact. These guided munitions can be rapidly constructed from pre-assembled kits, in effect allowing the mech to replenish its own ammunition supply.

The Saxony Empire embraced technological change early on, and saw to display this strength in all aspects but no less in their armed forces: manifesting in the form of this strange but potent factory on legs. It is shaped like a large bell on five spider-like legs, with five tall openings in the hull which unleash its ordnance. A smokestack belches smoke from the top of the machine.

The Stiefmutter is an excellent support unit functioning as a form of supplementary artillery. Its opening barrage lets it launch a total of five wheel bombs at once for a great burst of damage, and the wheels have a wide explosive radius. Units hiding behind walls or buildings are no safer, as the bombs will seek them out. After the initial barrage, it will continually pound the enemy as fast as it can assemble new bomb units.

However, the machine suffers in direct combat, having fairly low HP and only light armor. The relatively slow rate at which it replenishes its wheel bombs and their weaker effects on medium or heavy armor leave it highly vulnerable to confrontation if cut off from support. Its low speed also leaves it unable to flee, and it struggles to keep up even with fellow Saxony units. Properly supported, however, it provides valuable and flexible fire support, its explosives will carve a way to victory.

The Stiefmutter forgoes mounted weaponry, instead incorporating what is essentially a small assembly plant full of kit parts with which to build monocycle wheel bombs, which it lets loose out the holes in the hull. 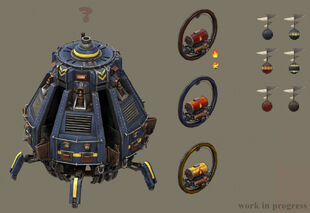 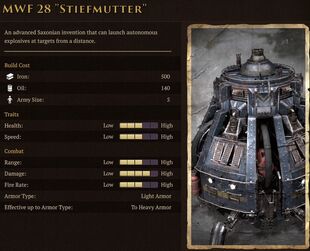 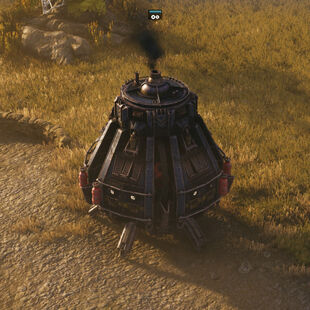