A commander in the Polanian military. Leads the charge with his cavalrymen using rifles, sabers, and sticky explosives.

Commander Michal Sikorski (pl. Michał Sikorski) is a hero of the Polania Republic.

The leader of a fast and deadly cavalry unit, he is a skilled tactician and officer. He appears as an NPC and then a playable character in the last level of "The Price of Freedom" as well as the last two levels of "The War to end All Wars."

A man of average build, Michal has dark brown hair with a carefully trimmed mustache. He has a long scar across his face starting behind his left eye, crossing his nose, and ending on his right cheek. He wears a decorated officer's jacket with red trim, a steel cuirass painted red and white, white gloves, and a cap with a red band, brass buttons, and the Polanian eagle. His horse is pure white to distinguish him from the other riders under his command.

His men ride chestnut colored horses with black manes and a white diamond on their head. They wear uniforms similar to their commander but without the breastplate. They each have a blue and red chevron on their right arm, and wear leather load-bearing harnesses. Michal starts out with four other troopers and can gain up to seven total.

Commander Sikorski is a cavalry officer who gathers cavalry units around him. His squad is very fast and gets bigger and bigger as Michal gains levels, becoming dangerous for enemy infantry units out in the open. He has a "charge" ability which is particularly devastating to infantry - even exosuits, as they are knocked down and unable to fight or run away while being cut apart. Stick bombs also allow the cavalry some anti-structure/anti-mech firepower, which scales as the unit grows larger. Lastly, their speed makes them excellent at outmaneuvering and overwhelming weapon system crews.

They are, however, vulnerable to machine guns, flamethrowers, and have little hope of defeating any armor heavier than medium. Michal is also extremely vulnerable to the weapons of the PZM-7 "Smialy", Sd. KS 78 "Isegrim", and SHM-86 "Kolokol", all of which deal bonus damage to light armored targets and can take Michal out very quickly. If Michal goes down, the rest of the cavalry accompanying him will flee, so it is important for the player to avoid letting him take unnecessary damage.

At some point in his life, as did many Polanians, Michal joined the military. He served for some time in the cavalry, earning the honor of gaining his own command of a cavalry regiment. During the Great War he served with distinction, using his cavalry to disrupt enemy artillery positions. For his bravery, he was even awarded the Virtuti Militari, the highest military decoration in the Polanian military.

When the Great War ended and Polania was forced into an armed occupation by Rusviet, Michal did all he could to abide by the treaty to spare his country any more destruction. This put him at odds with his fellow officer Lech Kos, who was infuriated by the government's capitulating and instead formed the Polanian resistance to wage a guerrilla war, joining forces with his niece Anna, a local hero. He tracked them down, trying to reason with them to not breach the blockade around Kolno as well as to cease attacking Rusviet troops. He argued heatedly with Lech to no avail, the latter even threatening him with a cannon, but Michal relented when Anna pleaded to let the resistance bring the starving citizens food.

Lech used this opportunity to start a bloody armed uprising in Kolno, bringing the hammer of the Rusviet military down on the city. He believed this intentional massacre would spur Polania into rising up and driving out Rusviet. In a way, this worked; Michal could not stand by and watch the outright slaughter, so he took his forces and drove the Rusviets back with a surprise cavalry charge. Teaming up with Anna, they proceeded to destroy the remaining Rusviet fortifications and troops in Kolno, although failing to capture their leader Colonel Zubov.

After straightening up affairs in Kolno, Michal and Anna tracked down Zubov to Tesla's Factory, although the Colonel had already breached the facility and had hunkered down. Anna was captured trying to assassinate Zubov, and Michal was unable to gain any ground until Saxony rebels under Gunter Von Duisburg and Olga Morozova arrived. Hesitant to help his former enemy, he nonetheless accepted and the two rescued Anna and pushed into the Factory.

Just as the heroes almost captured Zubov once again, he managed to escape when the Icarus Protocol was activated by Zubov's forceful entry to the Factory's inner sanctum. Teaming up with Gunter, Olga, Anna, her brother Janek, and Gunter's mechanic Frieda, Michal fought and brought down the massive machine before it could fire its ultimate weapon.

Primarily Michal and his men wield standard bolt-action infantry rifles, offering strong and long-ranged but slow firing anti-infantry power. When in "charge" mode, they draw their sabers, dealing heavy melee damage to infantry. Lastly, they can throw improvised sticky explosives that attach to surfaces or mechs, detonating after a short time to do decent damage to armor. 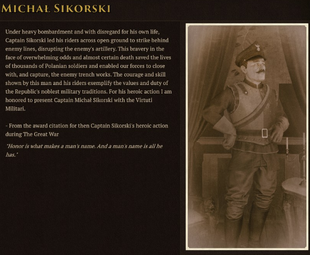 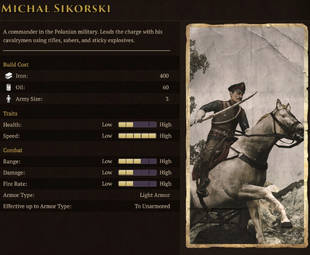 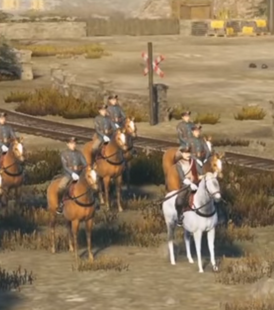 Michal at the head of his unit