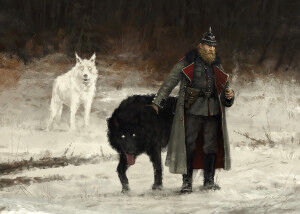 Nacht and Tag (trans. "Night and Day") are heroes of the Saxony Empire. A pair of particularly large dire wolves, they are the constant companions of Gunter von Duisburg.

With a strong love of his country, Gunter enlisted in the Saxonian army. He spent the first few years of service training soldiers to work with dire wolves, where he formed a kinship with two particular wolves: Nacht and Tag.

When the war began, Gunter and his wolves led elite mech squads across the forests and mountains of Saxony and Europe. His name was both feared and respected, and his jacket grew heavy with medals of honor.

After the war, the Saxon emperor sought an audience with Gunter, Nacht, and Tag. He asked them to go on a special mission to the east, where he saw an opportunity to expand to the unclaimed lands surrounding the Factory. Gunter was never one to turn down an adventure, so off he went to the east.

Nearing the end of the Great War, Gunter retired in humiliation after he was forced to take the fall for the actions of Prince Wilhelm. Returning to his home Castle Duisburg, he spent time hunting birds with his wolves. One day while hunting, Nacht flushed birds into the air, but although the wolf caught one with his teeth Gunter missed with his rifle. Upon returning to the castle, Gunter received notice that the Kaiser wished to see him in Dresden.

They did not accompany him to the capital city, and while there, Gunter was framed for the Emperor's murder by the Prince. They rendezvoused with him in the countryside not far from the Saxony Empire's border and fought alongside him through forces loyal to Wilhelm. They all fought their way to Tesla's factory together.

Both being wolves, they are naturally equipped as apex predators in their own right with powerful jaws full of sharp teeth. They are fast, strong, cunning, and have keen senses but most importantly they support their master. They fight with a style between to that of Polania's Wojtek and Rusviet's Changa, hiding unless needed but still actively fighting to protect their master in close combat: appearing where least expected, pouncing, and disappearing only to attack again from another angle.