Nikola Tesla is a famed inventor and genius whose machines have thoroughly changed the world in the 1920+ universe.

Independent of any faction, he personally appears at the ends of the "Shadow over Europa" and "The War to End All Wars" Iron Harvest campaigns but also in a Scythe expansion.

Tesla is a tall and thin old man, and due to his advancing age his mustache and center-parted hair have become white. He wears a simple brown suit and jacket with black cuffs, a white shirt, and blue tie with black leather shoes.

Due to his seemingly eidetic memory, Tesla made a habit of not making blueprints or writing down notes on his work, instead storing it all in his head.

From the outset, Tesla had known that this new technology had the potential for death and destruction, but the armies showed little discretion in applying their new machines of death during the Great War. There were unending stories of civilian casualties; Tesla witnessed the carnage everywhere and some say he went mad. Whatever the case, he closed the Factory and disappeared with his daughter.

One day, the nations of Europa received a distress call from none other than Tesla's daughter, claiming that mercenaries had breached the Factory's inner sanctum and captured both herself and her father. When their allies arrived, Vesna was rescued but the mercs had unfortunately moved Tesla himself elsewhere. These agents were revealed to work for an underground seditionist organization called Fenris, and they had taken Nikola to force him to develop new tech and war machines for them. Among these was a massive and powerful mech known as the Annihilator, intimidating machines that proved hard to kill.

Despite Fenris' campaign to seize power over the continent with their new firepower and influence, Tesla was eventually saved by his daughter and her allies, dealing Fenris a major blow. Aiding his rescuers, he used a high-speed monocycle (his own design, of course) to move around, determined now to undo the power he had given Fenris.

During his life, Tesla became a world-famous inventor. His work even seemed to blur the line between science and magic in the eyes of some.

Among other inventions, in 1900 Tesla developed a series of devices known as automachines. He intended for these powerful machines, later known as mechs, to greatly advance and improve agriculture, industry, and other aspects of life so people could work less and devote more of their time to other pursuits like science and the arts. With these machines, he constructed an independent factory in Europe and within five years he built a whole city around it to house tens of thousands of workers. Among his closer associates were Piotr Dybowski and Heinrich Steinmetz.

Although the mechs did fulfill their purpose to revolutionize industry and agriculture, the governments of all the nations also began to weaponize their mechs as incredibly destructive war machines. Tesla greatly disapproved of this, and refused to produce war machines at the Factory to sell to other nations, although advanced battle mech and exosuit designs were produced for use in the Factory's self-defense.

In 1905, Rusviet, under the secret heading of a shadowy organization called Fenris, attacked the Factory with aims of seizing it, its advanced technology, and Tesla's prototypes. Despite the intense fighting, the Factory repelled the invaders, forcing Tesla to install nearly impenetrable defenses around the city. Becoming incredibly paranoid because of this war, shut down the Factory, closed its borders, and constructed the secretive and ultimate invention "Icarus Protocol" to prevent its technology from ever being seized again. This done, Tesla withdrew from society for over a decade, hiding in the safety of the Factory with his remaining employees and assistants.

His factory remained shut down during the horrors of the Great War, which spanned five years and saw the Europan landscape devastated. During this time, Tesla became aware of Fenris and their goals: to destabilize the nations, start wars, and seize more and more power in the chaos. He did his best to warn the governments of Europe by sending letters to Tsar Nikolaj of Rusviet and Kaiser Friedrich of the Saxony Empire among others.

When Fenris's forces led an attack on the Tsar's peace talks at the end of the war in 1920, he sent a number of troops to stop Fenris and his information helped the peace talks proceed despite the attack and the war finally ended that year. However, Zubov did manage to get his hands on one of Tesla's TF-233 "Šetač" exosuits, which he sent to a lab for examination.

Fenris learned of Tesla's awareness and renewed their efforts to get into the Factory by hunting down Piotr and Heinrich. In doing this, Fenris-led Rusviet forces under the command of their operative Colonel Lev Aleksey Zubov managed to obtain a transponder from Piotr's mechanical arm to bypass Tesla's powerful coil tower defenses and fought their way through his defense force of mechs and armed employees. Breaching the main gate, Zubov located Tesla in his simple house and made to take him back to Rusviet.

Tesla, taking no chances, activated the Icarus Protocol: a massive unmanned three-legged tripod mech with impenetrable armor that would charge up a massive electrical blast that would melt all metal within 20 kilometers of the Factory, preventing even a scrap of his designs from ever being stolen and used for evil purposes. He had designed this machine to become runaway once active, unable to be turned off even by him. Rogue elements of the Polania Republic and Saxony Empire's militaries came to Tesla's rescue, driving away Zubov and battling Icarus with the aid of Rusviet forces defecting from Fenris. Against Tesla's protests, they brought down the machine, saving the Factory.

Tesla quickly fell into despair: the factory, all its technology, and his prototypes were now vulnerable to Fenris's return, and all his efforts to unite the leaders of the world had failed to stop the organization. His hope was renewed, however, by the alliance of the Polanian Resistance under Anna Kos, Saxony Rebels under Gunter von Duisburg, and Rusviet defectors under Olga Romanov, as well as the many other heroes and civilians who had helped stop Icarus. With the help of his new allies, he set about repairing and upgrade the Factory defenses in preparation for taking the fight to Fenris. 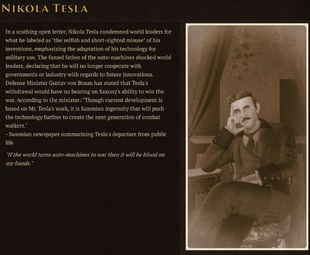