The PZM-11 "Łowca" is a medium-armored mech hunter unit produced by the Polania Republic. It fires close range bolts, destroying all kinds of armor.

Many of Polania's mech units are highly specialized, and the "hunter" is no exception. It stands on two comically thin legs with a tall torso that is much deeper than it is wide, with two powerfully built arms like a boxer's with fists poised to strike. The crew's viewing port is a slit on the front of the hull. Lastly, on its back and on top of the chassis is a harpoon ready to pierce even the toughest armor.

The PZM-11 "Lowca" is truly and simply a mech designed to go toe-to-toe with other mechs. Both arms are equipped with giant nail guns that fire armor-piercing bolts at targets, and these consistently high damage to everything. Its medium armor and considerable HP let it take a bit of a pounding while getting into range, making it largely able to ignore infantry while it squares up with armored units. It is very effective at taking out all kinds of armor or fortified buildings, particularly once it reaches veterancy, unlocking its harpoon attack which adds a huge chunk of damage. This ability is particularly effective if the Lowca is in a position to hit the enemy from behind; even heavy mechs are not safe.

However, the Lowca suffers from poor range, slow speed, and struggles to deal with multiple attackers at once. Artillery like Field Guns can knock it out quite easily, but it can also be countered by anti-mech infantry. Its nail guns do great damage against unarmored units, killing most infantry in two shots, but are not able to bring them down very quickly, so a mob of gunners can bring the Lowca down with little problem. Being as slow as it is and having short range, it is also not a hard unit to kite. Therefore, the Lowca works best with support from units like the PZM-9 "Straznik" or squads of riflemen to deal with infantry while it knocks out armored units.

The Lowca has two piercing nail guns, which use compressed air to fire in sequence and are very effective against all types of armor. Furthermore it has a harpoon on its back that becomes available as soon as the Lowca reaches its first veterancy-level.

Sting: The Lowca draws a harpoon from its back and hurls it at the enemy, dealing very high amounts of damage to all sorts of targets. This weapon, however, has a very short range. 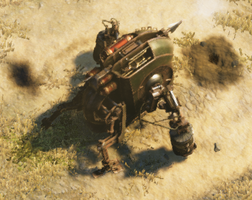 Old Sting animation
Add a photo to this gallery
Retrieved from "https://iron-harvest.fandom.com/wiki/PZM-11_%22Lowca%22?oldid=4590"
Community content is available under CC-BY-SA unless otherwise noted.