An artillery mech that can hold its own in combat. Can deploy to increase its range and damage at the cost of mobility.

The PZM-13 "Mocny" (Strong) is a medium-armored, dual-mode artillery mech produced by the Polania Republic. Armed with a heavy cannon, It can strike opponents near or far by switching between mobile or siege configurations.

Polanian mechs are generally known for their speed and agility, but when the lighter mechs need heavy fire support it is the Mocny that they generally call on. It walks on four legs that give the vehicle a lot of stability, and allow the vehicle to aim its cannon by adjusting the angle of the chassis. The asymmetric body features a large cabin to the righthand side with viewports and a machine gun turret, while on the lefthand side is a massive cannon that can either be aimed upwards for artillery mode or locked horizontally for direct fire. Its front legs reconfigure into spikes which jam into the ground to help stabilize the mech during siege mode.

The Mocny is the most versatile of all medium mechs and artillery units, able to function as a moving anti-mech unit and an artillery unit in one package. It has medium armor unlike its light-armored Saxony or Rusviet artillery counterparts, allowing it to go toe-to-toe with lighter mechs while in attack mode. While in siege mode, it can fire a long distance shell that inflicts heavy damage to anything too slow to get out of the way like entrenched troops, buildings, or heavy mechs. It can also support friendlies and itself with its smoke screen abilities.

Its biggest weaknesses are poor speed and agility. The cannon fires slowly and the mech turns even slower; its cannon being fixed forward requires the mech to turn itself to adjust the firing angle. This makes the mech easy to rush or flank, and getting behind it leaves the Mocny little time to defend itself. In artillery mode it is even more vulnerable as it has a minimum range where it cannot target close-in units as well as a limited cone of fire. Its siege shells can be dodged by mobile units, while the time it takes to switch between modes leaves it open to attack. This is not helped by the Mocny's poor durability for its size and cost; it will go down easily if it starts taking fire. This all means the Mocny works best hiding just behind other units or having good support while it pounds the enemy from a distance.

The PZM-13 "Mocny" has a large-caliber cannon longer than the chassis it is bolted onto, and can be used either when standing or deployed. This cannon has different ranges and damage values for both modes. Furthermore, it has a side-mounted machine gun that is placed at on the righthand side of the cockpit. 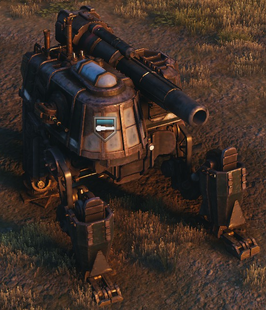 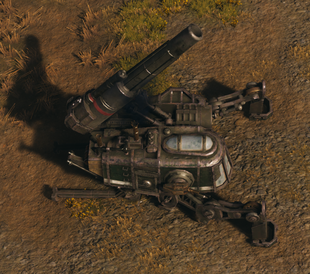 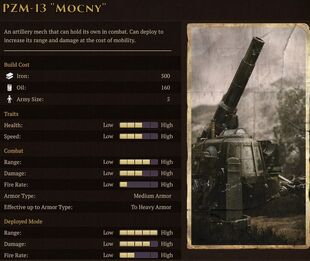 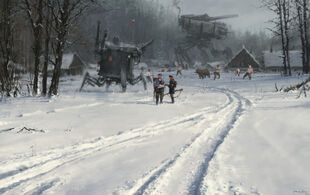 "Battle Before the Battle" by Jakub Rozalski
Community content is available under CC-BY-SA unless otherwise noted.
Advertisement