PZM-2 "Rycerz" (Knight) are heavy infantry units trained by the Polania Republic. Bold and agile, they are equipped with mechanized armor, cannons, and ballistic shields.

Inspired by the medieval knights of old, these gallant warriors of Polania bridge the gap between the light but vulnerable infantry and the tough but bulky mech units. These soldiers wear light mechanical suits armed with a powerful drum-fed cannon as well as a small shield to deflect incoming fire. They are considerably less bulky and intimidating than their Saxony counterpart the Pkp 17 "Eisenhans": instead of being encased in thick armor, the pilot is more or less strapped to the front of the main hydraulic framework with a heavy face-mask and some lighter plates covering parts of their body. The signature clanking of their plates and joints in the near distance signal to all that the knights of Polania have arrived.

These mechanized infantry excel in front-line combat. Their armor is not the strongest, but gives them the speed to move with the front-lines and take hits that would eviscerate normal infantry. Their cannons deal steady damage to enemy armor, especially in groups, so as with many Polanian units they excel at hit-and-run attacks, armor harassment, flanking, and can quickly adapt to a changing battlefield situation with the use of their arm-shields.

They do sacrifice armor for speed and agility, so they cannot take too much of a beating. They also have relatively short range, but their speed makes it easy to close the distance and avoid incoming artillery. Unfortunately, they are not fast enough to outrun infantry, but can handle most infantry in a straight fight without anti-armor support.

Each mech suit has an arm-mounted cannon with a decent rate of fire that does well against light and medium armored units.

Shields Up: Rycerz lift their shields and hunker down, reducing incoming damage at the cost of movement speed. 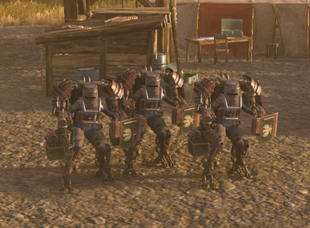 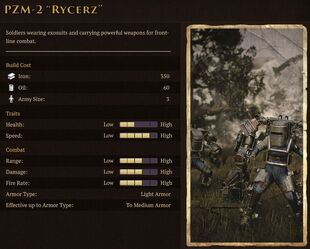 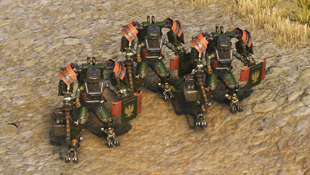