A fast-moving scout that can engage targets at long range or in melee.

The PZM-7 "Śmiały" (Bold) is a light mech produced by the Polania Republic. It is light and incredibly fast, armed with a powerful gun effective for up to medium armor and a bayonet for close combat.

The PMZ-7 "Śmiały" is perhaps the best representation of Polanian doctrine; lightly armored but equipped with a powerful anti-mech rifle and able to move swiftly. A revolutionary design at the outbreak of the Great War, it remains competitive years later and even the oldest models have been kept in service. It has been especially effective when deployed alongside cavalry divisions, supporting Polanian mounted infantry as a sort of modern iteration of the famed "Winged Hussars."

In a world of mechs, this pride of Polanian engineering is the one that most resembles its creators by having roughly human proportions. Like its fellow light Polanian mech, the PZM-9 "Straznik," it has a cylindrical torso but with a taller and more narrow upper body, longer legs and a pair of arms. The left arm even has a "hand" which is used to cycle and stabilize the weapon or to grab objects. Its main engine is housed in the back with two smokestacks clearly visible, and on the hull is a mounted searchlight for night operations.

A long stride and design built for running give the Śmiały incredible speed, making it the second fastest unit in the game as well as the only mech that can outrun infantry. Excellent for reconnaissance and raiding, it is able to easily attack and then run off to reposition and attack again. Its weapon has good range, able to deal heavy damage to even medium-armored units before they can fire back, particular if it can get behind the enemy. Its speed also makes it good for hunting down isolated, weakened, or fleeing units, as well as outflanking entrenched guns.

Like the Strażnik (although a bit tougher) the Śmiały suffers from light armor and will generally lose in a one-on-one fight with most mechs and falls to anti-mech units like field cannons and anti-armor gunners fairly quickly. While strong, its overall damage over time is low as its rifle fires slowly. Thus this unit works good in packs carrying out hit-and-run attacks, raids, and recon ahead of the main force. It also works well with heavier units and infantry to guard the flanks. When used in large groups of five or more, they can be a deadly force, able to pick apart even heavy mechs if they catch one by itself. Countering a wolfpack of Śmiały's can be difficult, but when they are in packs it is best to deal with them using groups of the Sd. KS 78 "Isegrim" or SHM-86 "Kolokol", which (while not as fast) can keep pace with the Śmiały's and beat them in straight-up fights with equal numbers. It is recommended when engaging another mech, to fire and reverse to keep the Smiały out of the enemy's range. This tactic can be moderately effective against infantry as well.

Built into the crook of the mech's right arm is a cannon resembling a scaled-up bolt-action rifle with a massive attached bayonet. This weapon hits hard against medium armored units and infantry with good range, but with a low rate of fire. 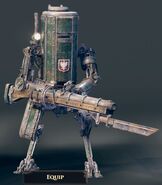 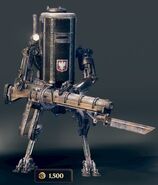 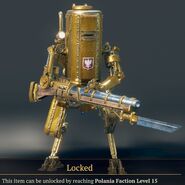 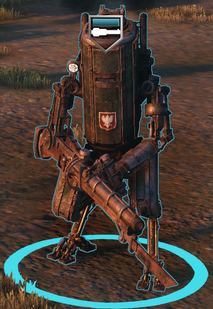 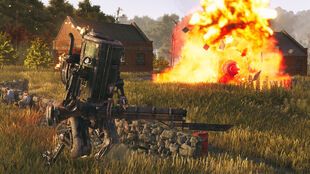 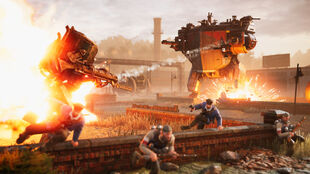 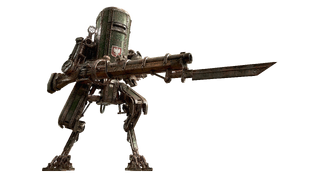 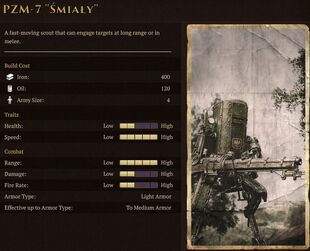 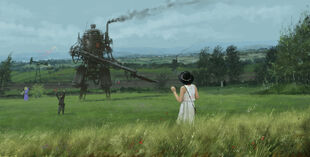 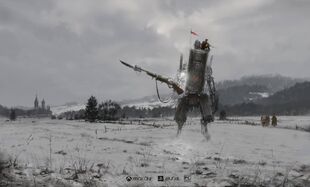 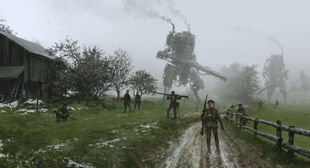 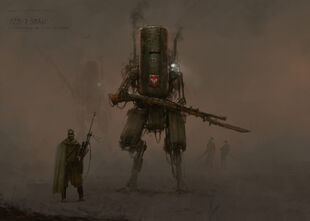 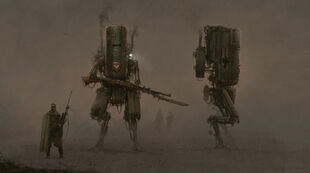 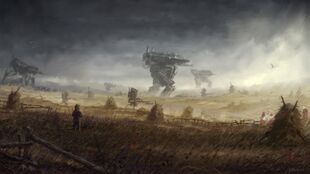 "In the Middle of a Storm" by Jakub Rozalski 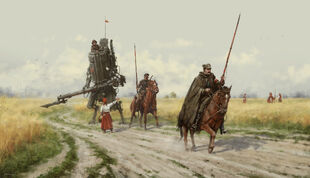 "Polanian Lancers on the Patrol" by Jakub Rozalski
Community content is available under CC-BY-SA unless otherwise noted.
Advertisement