Piotr Kos (aka Professor Piotr Dybowski) was the father of Anna, Janek, and the brother-in-law of Lech. He was a scientist with ties to the mysterious Factory.

He appears as an NPC in Iron Harvest for the first three levels of "The Price of Freedom."

Piotr was a tall man of standard build. He had red hair with a large beard, full sideburns, and a mustache. He wore a large green overcoat over a set of blue mechanic's overalls, and over his right hand he would usually wear an long leather glove. This was to hide his false prosthetic arm.

When Piotr was younger, he took up work at Nikola Tesla's factory. Prior to or during this work, he somehow lost his right arm which necessitated an advanced metal prosthetic. He fell in love with and married Liliana Kos, having two children with her: his son Janek and his daughter Anna. Liliana's brother, Lech, was highly disapproving of this due to Piotr's work as a scientist rather than a soldier, unable (or unwilling) to see the value of such work in the scheme of Polania's sovereignty. While working at the Factory, he became good friends with Heinrich Steinmetz, a Saxonian engineer.

In 1905, the Rusviet military tried to take the Factory by force and Liliana was killed in the fighting. Bereaved, he left the Factory with his children to start a new life in Zalesie, a village in the Polania Republic. He kept in touch with Steinmetz via letter on at least one occasion, and he took his wife's maiden name to make it harder for them to be found.

At the outbreak of the Great War in 1915, his brother-in-law Lech arrived at the village to find recruits for the Polanian military, and these included Janek. Piotr protested, arguing with Lech, but Janek enlisted anyway. The boy was listed as a casualty in the war, leaving Piotr heartbroken but determined to love and protect his daughter. He was not all too supportive of Anna's having adopted a bear cub, Wojtek, whom she had found in the woods he and he made her keep him a cave a distance from the village.

After the war in 1920, Piotr became a person of interest to the Fenris organization. Unable to get to Tesla and the Factory themselves, they started hunting for Tesla's previous employees, particularly "The Keys": Piotr and Steinmetz. They sent one of their agents, Rusviet Colonel Lev Aleksey Zubov and a military force to capture him.

While walking in the forest with Anna to deliver some tools to repair a lumber mech, a messenger arrived telling him Resistance fighters were in Zalesie to see him. Leaving Anna, he returned to the village and the rebels gave him a letter from Lech, warning him that the Rusviets were coming. Almost immediately after, Rusviet soldiers ransacked Zalesie in force; in an attempt to draw the enemy away Piotr used his arm's hidden power to destroy a bridge and a SHM-86 "Kolokol" light mech before running north with soldiers hot on his tail. Anna would briefly reunite with Piotr right before they are ambushed by Zubov himself in his colossal, state-of-the-art mech, which he managed to disable with his EMP but is still captured. He tried to self-destruct his mechanical arm, but for some reason this failed, and he was tortured for information on the Factory as Fenris aimed to access it to gain technological superiority.

Anna would gather the scattered Polanian troops in the area and retake a train depot where he was held to be shipped to Rusviet. However, his mechanical arm had been torn off during interrogation and he had bled too heavily. He unfortunately died of his injuries, expressing regret to Anna that he had failed to protect her and Janek. His death would further galvanize the Polanian resistance to steal a war train and break the blockade around Kolno, dealing a major blow to the Rusviet occupation. However, when Zubov took his mechanical arm he also took its transponder that identified Piotr as friendly to the Factory's defenses, allowing Fenris forces to finally breach the Factory. 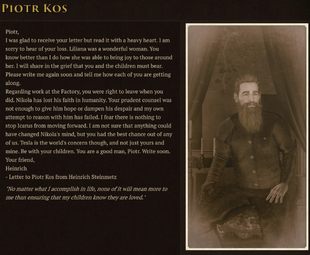