Pkp 17 "Eisenhans" are heavy infantry units trained by the Empire of Saxony. Equipped with battering rams and long-range mortars, the suit is very hard to move in so Eisenhans can only move at a walking pace.

While smaller than any true mech, these units are an unnerving addition to the battlefield: seeming human yet eerily robotic and overwhelming. Human soldiers clad in mechanical exoskeletons, they have very thick armor plating covering almost every inch of the user's body as well as a heavy pickelhaube-type helmet and gas mask with menacing, glowing lenses. A series of pistons and joints aid the wearer in moving all the weight, a surprising feat in a relatively small package. Their very presence on the battlefield is said to have a psychological effect on enemy infantry.

Eisenhans are fairly effective against all types of units. Their medium-rated armor slows them down immensely, but also means they can shrug off small-arms fire as they inexorably advance towards the enemy. Their mortars hit from afar and have a large area of effect, devastating groups of infantry, fortifications, and armored units too slow to get out of the way.

These units struggle with targets able to avoid their mortar shells while staying out of reach of their melee. With a slow rate of fire and the need to stand still in order to fire, they are best when used against slower or entrenched targets, or just for long-ranged fire support. Combined with its medium armor and slow movement speed Eisenhans can easily be taken out by fast, close-ranged targets strafing, so it is best to keep Eisenhans behind the lines supporting friendly units on the attack or absorbing enemy fire. If faced with an enemy that is sure to overwhelm them, it may be better not to tell them to retreat and instead have them fight to the death, as they likely will not get away if told to run: even if doomed, they will at least still cause a lot of damage. They are also not necessarily a replacement for dedicated artillery, but need less supervision.

The Eisenhans' main offensive weapons are two shoulder-mounted mortar launchers which are fired after the user secures themselves in a kneeling position, as the recoil would likely knock them over. In their left hand they carry a battering ram which they use to deal heavy damage to armored units in close combat.

Like many artillery units, Eisenhans "deploy" to use their mortars, leaving them immobile but able to dish out a lot of long-range firepower. 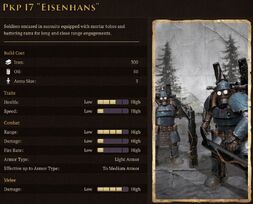 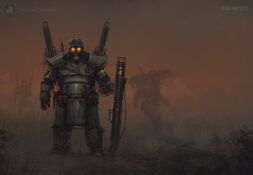 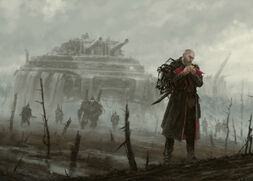 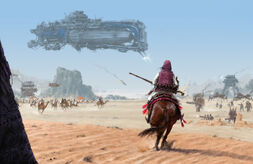