Polanian Flamethrowers are specialized infantry units fielded by the Polania Republic. They are devastating against unarmored units, even ones hiding in buildings or behind walls.

Fire has always been a double-edged sword, and these pyromaniacs level its destructive edge to punish enemies taking cover. They wear the same uniforms as Polanian riflemen with a few additions to better protect them from the back edge of their weapons; donning a thick flame-retardant apron with a left sleeve, heavy gloves, and a gas mask to prevent inhalation of smoke and fuel fumes. Their flamethrower is built to be very slim and minimalistic, while the back-mounted fuel tank is quite large.

Flamethrower units are specialist anti-infantry units, with a knack for flushing out entrenched opponents. Flamethrower attacks ignore cover and building protection, making them invaluable at razing base defenses like bunkers or removing stubborn infantry holing up in a house.

However, they are slower and have a short range compared to most other infantry. As such, Flamethrowers are a bit niche; they tend to go down quickly in a one-on-one fight and are devastated by anti-infantry mechs like the Sd. KS 49 "Grimbart." But if backed up by a well rounded army, flamethrowers will melt enemy defenses and the infantry within. 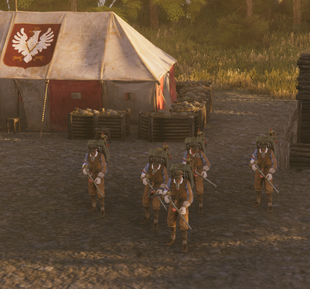 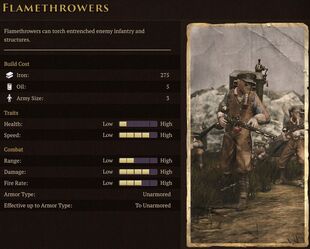