Polanian Grenadiers are upgraded infantry units trained by the Polania Republic. While they can still use the rifles afforded to them from being a Rifleman, they have the added bonus of being able to use grenades for more versatility.

These proud sons of Polania are fresh off the farm in many cases, but no less ready to lay down their lives for national sovereignty. All volunteers, many of them are crack shots coming from rural communities, having been trained to shoot their whole lives and instilled with national pride from birth. Their uniforms are quite different from that of standard riflemen: they wear the same green pants, brown breeches and black leather boots, but instead of a jacket they wear a blue vest, an off-white sweater, and an olive-drab beret. They also wear a large number of grenades on their load-bearing harness, with more hanging from their hips.

These Polanian infantry fulfill all the same roles of standard riflemen and more, being quick and cheap to produce. They use tried-and-true bolt-action rifles, giving them the best range and accuracy of all standard infantry units as well as good damage per shot. They work together with machine gun units extremely well, as any suppressed unit will have a hard time getting into range while the Riflemen are free to pick them off at will. They are also slightly better equipped to combat light armor or enemies that have bunkered down using their grenades.

However, they also have the slowest fire rate and poor melee despite their bayonet. They rely on keeping the enemy at range, but are vulnerable to being rushed. In CQB, they will often lose to Rusviet shotguns or Saxony machine pistols. And like all infantry units they are vulnerable to machine guns; they are somewhat more effective against armor but their grenades rearm slowly and are still hopeless against most mechs. Thus they function best with armor support, machine guns, and cover to get behind.

Polanian Grenadiers are equipped with a bolt action rifle rifle, which makes them best at fighting in long-range fights. They also are equipped with a bayonet, which they use if engaged in melee. They can also can throw a grenade, effective against lighter armor and enemies behind cover.

Polanian riflemen seem to use a variant of the Lee-Enfield bolt action rifle, specifically the Short Magazine Lee–Enfield (SMLE) Mk I which saw service in many countries from 1903 onwards, including Poland (and thus would likely see service in the Polania timeline). 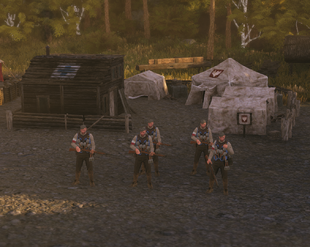 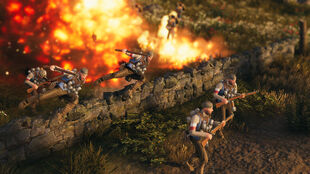 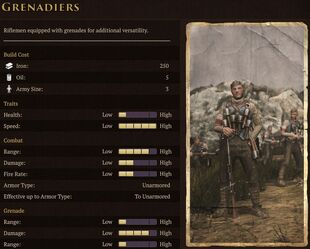