Polanian Anti-Armor Gunners, or simply Gunners, are specialized infantry units trained by the Polania Republic. They are armed with miniaturized cannons for use against armored targets like mechs.

With the advent of mechanized armor units trudging the battlefield and mechs or weapon systems of their own not always readily available, infantry often need a go-to and mobile option of their own. These demolition experts wear the same uniform as riflemen, except that their jacket is buttoned up in the front and they wear a leather load bearing harness. Compared to other factions, their cannon's design is very simplistic and bulky, more or less a green tube with handles welded on.

Gunners pack some of the best anti-armor weaponry of all low-tier infantry units short of heroes like Gunter. They are affordable to produce and in numbers can punch through light and medium armor with ease, especially if they use their relatively high speed to get behind mechs and exploit their weaker rear armor.

Their specialization in armor-busting, however, does leave them vulnerable to infantry, as their cannons are slow to reload and clumsy to aim at smaller targets. Their heavy equipment also slows them down, making escape from anti-infantry units like machine guns, anti-infantry mechs, or artillery difficult and costly. Thus, they require support from anti-infantry units, but in groups will wear down lower-tier mech units quite quickly.

Orders to pick up Engineering Tools: 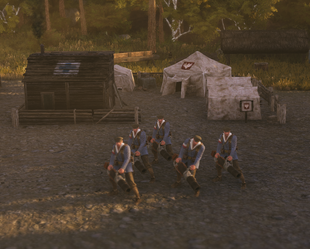 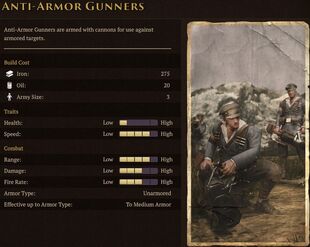