The Polanian Heavy Machine Gun or HMG is a weapon system built by the Polania Republic. It can suppress and mow down entire squads of infantry from a distance but must be placed tactfully to be put to best use.

All faction's HMG's are currently functionally and aesthetically identical (except for their crews in the latter case.)

Alongside mech units, these weapons show truly how war has changed, turning battles that once relied on masses of infantry in strict, tight formations into crushing massacres. The machine gun itself is a conventional design with a water jacket to keep the gun from overheating, a huge box containing an ammunition belt mounted to the right and a pair of thick shields which protect the crew from the front. However, instead of a bipod or wheel carriage the gun is mounted on a set of many small mechanical legs that makes the machine gun easier to move.

The HMG is absolutely deadly for infantry units to face alone. It can very easily suppress infantry, forcing them to crawl which makes escape or further assault impossible while they are quickly killed by the machine gun or any forces supporting it. It is also decently powerful against light-armored targets like exo-suits and mechs. Having multiple guns with overlapping fields of fire is nearly impossible to assault without armor support.

This weapon does have a number of limitations, however. Its range is inferior to other weapon systems and against medium armor or heavier it is more or less useless. This leaves it vulnerable to armored pushes or artillery like mortars. In addition to these, being a weapon system it shares the same weaknesses as its fellow systems: In order to move, it must redeploy which leaves it unable to fire and deploying again takes a moment before the gun is brought to bear again. This primarily makes them support and defensive weapons, but very deadly ones in the right hands. 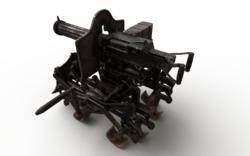 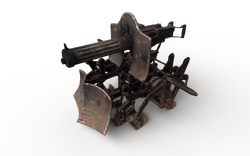