Polanian Machine Gunners or MG Infantry are specialized infantry units trained by the Polania Republic. Wielding machine guns, they are capable of suppressing enemy infantries and dealing damage up to light armored enemies by showering them with bullets.

Machine gunners from all factions are functionally identical.

Heavy machine guns proved to be dreadfully powerful anti-infantry weapons, mowing down troops in hundreds, but their weight made it hard to keep up with the rapid advance of infantry. These specialists carry much smaller but no-less-lethal machine guns to lay down lots of fire as nearby infantry move up. The machine gunners wear the same uniform as their Riflemen counterparts, with the addition of a grey bandana on their neck, ammunition belts draped over their chest and carrying a canister of even more ammo.

Machine Gunners are slower and more expensive than standard infantry and must take a moment to set up before firing. However, once set up, particularly behind cover, they can lay down devastating barrages of fire on advancing infantry. This will suppress them, forcing them to move at a crawl and pinning them in place. As such, these work extremely well in tandem with Polanian riflemen who can pick off suppressed Rusviet Vanguards or Saxony Stormtroopers at range before they can even fire back. This makes them powerful defensive units.

They suffer heavily against enemy armor, however, and are slow to adapt to a changing battlefield if caught in the open. They can struggle to escape if caught by mech units.

In the latest version, MG infantries can no longer be trained from Rusviet or Saxon barracks. Only Polanians and Usonians can train MG teams, but players can still equip any infantry by salvaging equipment from a killed MG infantry or loot from a weapon crate. 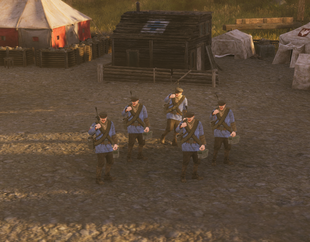 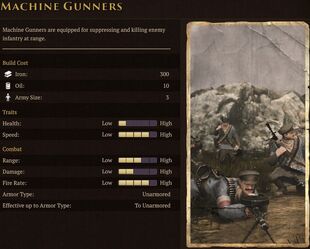