Polanian Riflemen are basic infantry units trained by the Polania Republic. Armed with rifles, they form the core of the Polanian army.

These proud sons of Polania are fresh off the farm in many cases, but no less ready to lay down their lives for national sovereignty. All volunteers, many of them are crack shots coming from rural communities, having been trained to shoot their whole lives and instilled with national pride from birth. Their uniforms comprise of blue jackets, green pants, brown breeches and black leather boots as well as a foraging cap bearing the Polania eagle.

Like all standard infantry, these Polanian infantry are quick and cheap to produce. They use tried-and-true bolt-action rifles, giving them the best range and accuracy of all standard infantry units as well as good damage per shot. They work together with machine gun units extremely well, as any suppressed unit will have a hard time getting into range while the Riflemen are free to pick them off at will.

However, they also have the slowest fire rate and poor melee despite their bayonet. They rely on keeping the enemy at range, but are vulnerable to being rushed. In CQB, they will often lose to Rusviet shotguns or Saxony machine pistols. And like all infantry units they are vulnerable to machine guns and do little damage to even light armored mech units. They function best with armor support, machine guns, and cover to get behind. 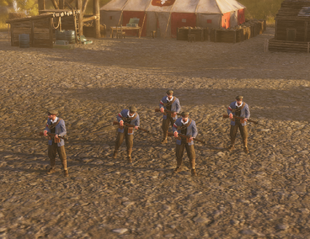 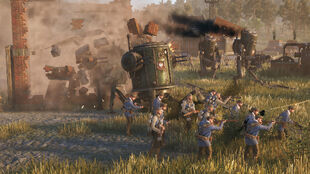 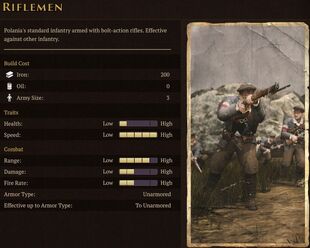 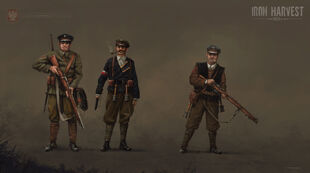 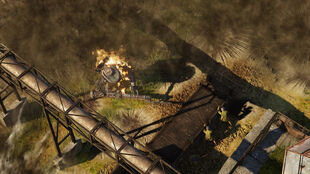 Alpha Build Polanian Infantry, notice their color is more in line with early concept art rather than later