Prince Wilhelm of Saxony is a hero of the Saxony Empire. Heir to the throne of Kaiser Friedrich, he pilots one of the finest examples of mech engineering in the world.

The Crown Prince is seen as a symbol of power and youth for Saxony. However, Saxony's opponents see him as an example of incest among Europe's ruling dynasties. He is a very thin man with a small mustache, thin slicked back brown hair with a bald spot despite his youth, and pronounced ears. He wears a clean and proper Saxony uniform fitting of his station with a finely detailed blue jacket with red decorations and gold trim, a pair of epaulets, white trousers, black knee-high boots, and an exquisitely styled leather breastplate. After the war he has a pronounced scar across his left eye.

His mech is the most anthropomorphic out of all mechs in terms of design and proportions, standing upright with two arms, legs, wide shoulders, and a boxy torso. It heavily resembles a human knight, with thick metal plates resembling gauntlets, pauldrons, greaves, sabatons, and boots as well as a tabard. It is covered head to toe with blue and gold engravings, Saxony iconography, and between the shoulder blades is the figurehead of a wolf.

Wilhelm is a decent support unit, able to bolster his troops on the attack and soften up the defenses in preparation for a charge. His barrage deals damage in a wide area, can knock out weapon systems, and his arm cannons can duel with lighter mechs fairly well. His weapons all fire slowly, however, and he himself is fairly slow as well; adding to this his mech locks into place to be able to fire and disengages slowly. He has medium armor and can withstand a fair bit of damage, but if he has to withdraw from a fight he will likely need cover fire.

Born as the oldest and only child of Kaiser Friedrich of Saxony, Wilhelm is heir to the throne and thus has had life handed to him on a silver platter. He is used to only the finest things in life, and is well-educated in history. He attended the academy and trained in the use of the finest mech ever designed in Saxony.

Wilhelm decided to participate in the Great War. Seen as an inspiring figure, he saw the coming battles as exciting and adventurous. He took part in the Saxonian military's first assault in Operation "Sonnenaufgang" against the Polania Republic's border under the command of the legendary Gunter von Duisburg. While the Saxonians anticipated an easy victory against a lightly defended border, resistance was stronger than anticipated while friendly armor was delayed, and a strong force of mechs and artillery quickly turned back the Saxony force and inflicted heavy casualties. Wilhelm began to change from this point onwards, developing an immense hatred of the enemy, particularly the Rusviet Tsardom. He saw the outsiders as savages and despaired at the immense loss of Saxonian lives.

During the Christmas Truce, he considered gunning down all the Rusviets who had arrived to drink, dance, and trade gifts with their Saxony counterparts, putting him at odds with Gunter. He was later given his own command of a small force known as the Saxonian Knights.

While on deployment to a less contested zone during the war, which at that point had been locked into a stalemate, a Rusviet base in Wilhelm's area began pushing artillery at a Saxony base. Blocking the assault, he and the Knights eliminated the artillery, the base, and captured a chlorine gas stockpile. He learned of a Rusviet fortress nearby and used the gas on it, breaking the stalemate and allowing the army to push further into enemy territory but infuriating Gunter. His tactics would only become more savage and reckless, and he soon stopped listening to his superior altogether.

While assaulting a strategically valuable village, Wilhelm refused to wait for Gunter's support to arrive and attacked, only to get caught in an ambush and take heavy losses until Gunter came to his rescue. Finally snapping once learning of the casualty numbers, he proceeded to snatch a Stormtrooper's machine pistol and gun down a number of unarmed Rusviet POWs, forcing Gunter to restrain him and knock him unconscious. This gave him a scar across his eye. The older officer tried to expose what had happened to the Kaiser, but Friedrich made Gunter out to be a liar so Wilhelm (and thus the monarchy) could save face, leading to Gunter to resign in humiliation.

Wilhelm soon found himself at odds with his father who wanted to maintain the tenuous peace treaty with Polania and Rusviet, while he himself believed that there could be no peace unless all of the realm's enemies were eliminated. One night while Gunter was visiting the palace, he snuck into the veteran's room, stole his handcannon, and shot his father dead with it. Pinning the murder on Gunter, he labeled his old commander as an enemy of the state and began rounding up anyone who would support Gunter as well as disposing of anyone with power to oppose him in the government and taking over the newspapers.

When Gunter began rescuing civilians and veterans to join his side, Wilhelm personally pursued his foe but was foiled by Olga Morozova demolishing the bridge crossing the border. He tried once more to bring down Gunter at a mountain pass, leading a sizable force, but the carefully chosen terrain and Gunter's strong defensive tactics pushed him back after three attempts, one by Wilhelm himself that saw his mech severely damaged.

Wilhelm always wears a ceremonial cavalry saber while on foot, but his primary and finest weapon is his mech.

His mech wields a pair of repeating light guns mounted under each arm with a decent rate of fire. The ultimate attack is a long-ranged rocket barrage from a pair of missile pods mounted on each shoulder. Similar to that of the SHM-68 "Nakovalnya" but with about two dozen smaller missiles to the Nakovalnya's sixteen bigger rockets.

Quotes on the Battlefield[] 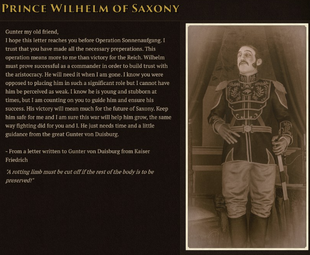 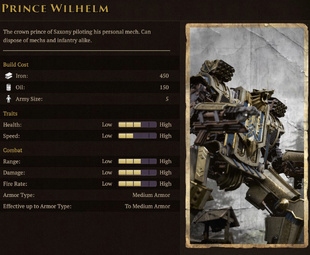 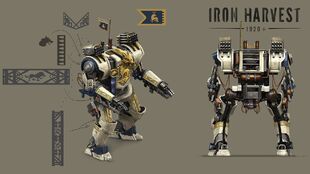 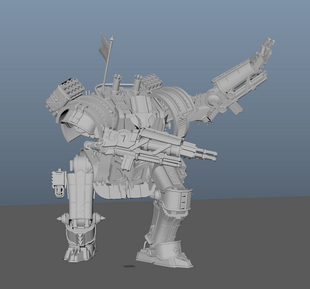 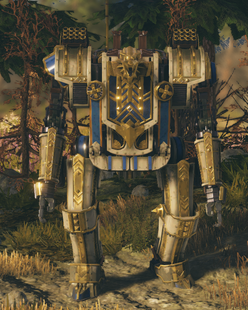 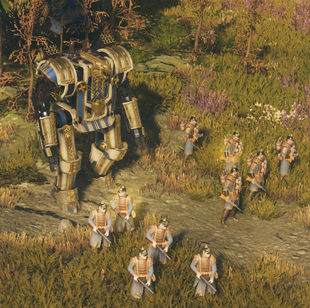 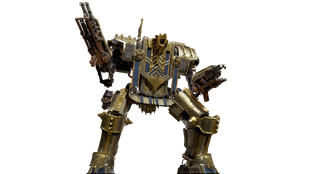