Randolph Wells is a Usonian Journalist that followed Captain William Mason during the Usonian Campaign in Operation Eagle. He reported on the Usonian missions in Alaska and the Usonian Intervention in Arabia. He helped paint a picture that William Mason was the poster boy of Usonia.

Randolph appears in the 3rd mission of the Usonian Campaign as a playable unit. He is equipped with a revolver that does light damage.

In the cutscenes, Randolph can be seen with a mechanized camera that will follow him around. 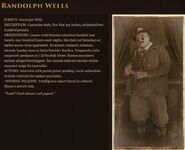