Absolute Monarchy (prior to Revolution)

The Rusviet Tsardom, also referred to in some materials as the Rusviet Union, or simply Rusviet, is a nation and faction in the world of 1920+.

It is huge, powerful, and has unmatched industrial and population potential. However, the country is tired and worn out by the Great War, famine, and internal unrest. People are frustrated, and the power of Tsar Nicholas weakens. The mysterious Grigori Rasputin has become an extraordinarily powerful man and revolution is in the air.

The Rusviet Tsardom, or what other name it has given itself, is currently a Fenris-Aligned state aussumedly under communistic rule by the people, or by Rasputin. Previously, Rusviet was a constitutional monarchy under the Tsar, but is transitioning to a more constitutional system, which is not proceeding without opposition from within. Its capital is the city of St. Petersburg. This was early on, as in 1905, a revolution occurred, causing the Tsar to cede some of his power to form the modern Rusviet state. In 1920, a second revolution, in part caused by the Tsar's advisor, Rasputin, succeeded in overthrowing the Tsar, mainly because they had military support from Fenris operatives. The exact form with which the new government will take has yet to be seen, but it appears to have radical socialist leanings with the confiscation of property and execution of landlords.

Their military doctrine tends to revolve around diverse combined arms and aggressive, forceful tactics, with a lot of anti-infantry capabilities and units built around close-range or melee. Their mechs have simplistic but rugged designs, while their buildings are oppressive and fairly simple, built to last with lots of concrete and steel.

As a faction, the doctrine of the mainline Rusviet army revolves around the offense, with many of their units and heroes being centered on getting up close, and punching hard. Secondarily, it should be noted that some Rusviet units have an affinity for fire, namely the SHM-56 Ognivo. As such, while these units are prevalent, and often carry several positives, to use them is not always the most optimal. A good Rusviet always knows their strengths and weaknesses, as such, when choosing which legendary commander to bring to the frontlines, that is of critical importance. Lev Zubov is a highly effective commander if one wishes to be breakthrough-centric, though his jump is difficult to master. As such, his presence in the later game is valuable, for his melee strikes do considerable damage. On the opposite end is Rusviet's sneaky spymaster, her SMG can attack and destroy single squads, and Changa's mobility allows for fast escapes when things get dicey. Victor Popov is a mix of both, a Glass Canon who need support, but if given, can annihilate other armored units in little time. His Gauss Cannon hits incredibly hard, and strikes true for the motherland. Rusviet's early pushes, with smart commanders constructing a Barracks before their Workshiop, are likely to be dominated by light mechs, Gunners, and Vanguard Infantry, at least until the middle game can be reached. Once in the middle game, and when Mechs begin rolling, the battles for territory become much much more difficult. It is also here where a Rusviet Commander must know their enemy to serve the Motherland well. Against a Polanian force, it is often best to make more Gunners, as their Anti-Armor capabilities are more efficient from range than the other option. If one is doing battle with the Saxons, however, Exosuits are preferred, as their high anti-armor damage at close range will destroy the slower Saxon mechs. Similar in tactical shift is going into the later games of attrition, where against the Polanian, the Nagan is more desirable. It's anti-mech ability, relative tankiness, and low cost ensure it will get something done, especially when backed up by artillery. Against the Saxon, the opposite is true. Oftentimes it pays to trade one of your Nagans for a Nakovalnya to provide excellent firepower until you can deploy your true walking behemoths. These weapons are a 'final weapon' of sorts. Ample meatshields, and incredible damage-dealers, these two are the culmination of our final push, a classic Rusviet offensive of desvastating steel in the most personal way. Glorious melee for the Tsar!

The symbol of the Rusviet Tsardom is a red five-pointed star. The color scheme for the faction's units are bright red and black or a dark grey. 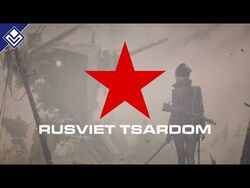 Relentless: The same section on the player mat as the previous turn may be chosen.

Rusviet mechs present diverse units and unique technology, favoring a more aggressive playstyle with close-ranged units, melee units, and area-of-effect weapons suited for crowd control. Many of the larger mech designs seem to be inspired by ships. They are named after weapons and objects in relation to their designs such as sickle (Serp), flint and steel (Ognivo), and a revolver (Nagan).

Rusviet has the following mechs:

"You Come to the Wrong Neighborhood" by Jakub Rozalski 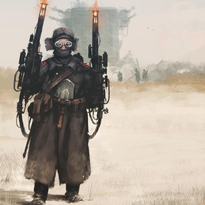 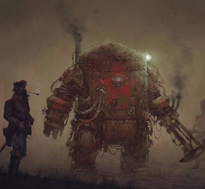 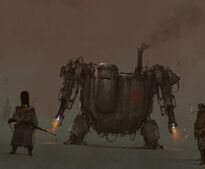 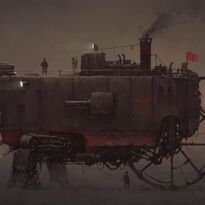 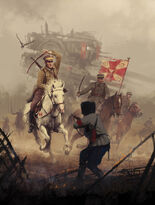 "Revolution Can Wait" by Jakub Rozalski

"You Shall Not Pass" by Jakub Rozalski

"They Are Coming" by Jakub Rozalski

"King of the Underworld" by Jakub Rozalski 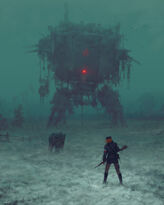 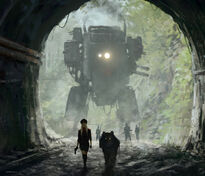 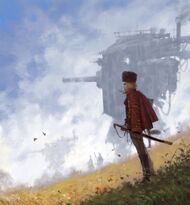 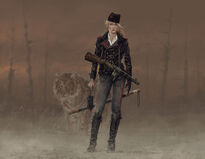 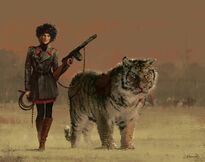 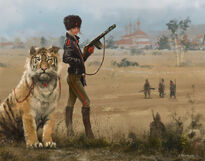 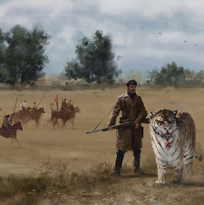