Rusviet Grenadiers are upgraded infantry units trained by the Rusviet Tsardom. While they can still use the semi auto shotguns afforded them from being a Rusviet Vanguard, they have the added bonus of being able to use grenades.

Rusviet volunteers that prove themselves have a chance of being chosen to become Grenadiers. The lucky few that are chosen are sent to the Grenadier Corp Headquarters at Moskau. There, they undergo intensive training with gun and grenade, and taught to be devoted to their Tsar. In battle, Rusviet Grenadiers are eager to show their superior training to their conscripted brothers.

As members of a special corps, Rusviet Grenadiers are eager and devoted to Rusviet. Their uniforms are identical to their non-upgraded counterparts, except that they wear a large number of grenades on their belt, with the ammunition pouches for their shotguns moved to the straps of their load-bearing harness.

Grenadiers fulfill all of the same roles of standard Vanguards and more. Equipped with shotguns, they are the strongest in close quarters so long as they can get close. Being fast, they are powerful in a group, swarming the enemy ahead of the main force to clear out infantry and soften up the enemy. They are slightly better equipped to combat light armor or enemies that have bunkered down using their grenades.

However, range is the still bane of these infantry. If something is preventing them from getting within effective range, like barbed wire or being suppressed by machine guns, they will get picked off without doing much damage, particularly by Polanian Riflemen. They are somewhat more effective against armor but their grenades rearm slowly and are still hopeless against most mechs. Sent in with units capable of slowing down or softening up the enemy like the SHM-86 Kolokol, they will make hostile infantry engagements short but sweet victories for the glory of Rusviet.

Rusviet Grenadiers are equipped with semi-automatic shotguns, which makes them best at short range and bad at long-range. They can also can throw a grenade, effective against lighter armor and enemies behind cover. 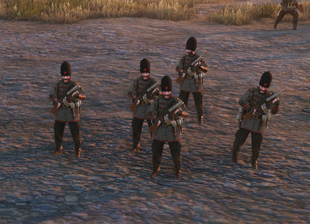 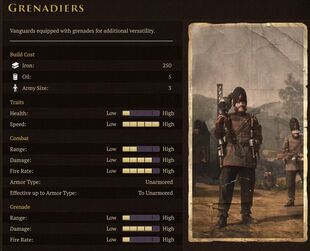