Rusviet Anti-Armor Gunners, or "Gunners," are specialized infantry units trained by the Rusviet Tsardom. They are armed with miniaturized cannons for use against armored targets like mechs.

Anti-Armour gunners are the youngest infantry specialist in the Rusviet army. Rusviet did not have Anti-Armour weapons when the war began. During the war, Rusviet had to rip-off Polanian and Saxonian Anti-Armour cannons for their Gunner corps. However, Rusviet Anti-Armour Cannons are still limited in supply, so a special training program was implemented to choose those best to use them. Of course, only the hardiest of men succeed and join the gunner corps. Most of these are from Syberia and Mongolia, where only the strongest of boys become men due to the harsh conditions.

With the advent of mechanized armor units trudging the battlefield and mechs or weapon systems of their own not always readily available, infantry often need a go-to and mobile option of their own. These demolition experts wear identical uniforms to those of Vanguards, except that their trousers are red and they wear a leather load-bearing harness carrying shells. Compared to other factions, their cannon's design is very heavy and sturdily-built.

Gunners pack some of the best anti-armor weaponry of all low-tier infantry units short of heroes like Gunter. They are affordable to produce and in numbers can punch through light and medium armor with ease.

Their specialization in armor-busting, however, does leave them vulnerable to infantry, as their cannons are slow to reload and clumsy to aim at smaller targets. Their heavy equipment also slows them down, making escape from anti-infantry units like machine guns, anti-infantry mechs, or artillery. Thus they require support from anti-infantry units, but in groups will wear down early enemy mech units quite quickly.

The Rusviet Gunner is also differentiated by having distinctly Mongolian features. 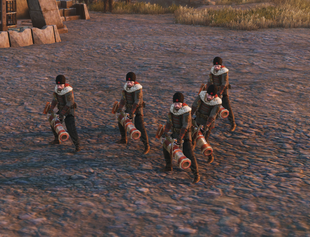 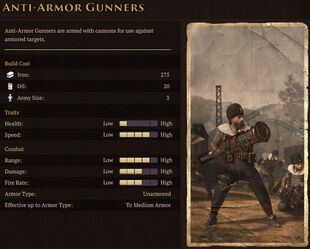