Medics can heal friendly infantry in and out of combat.

The medics of all factions are functionally identical.

War always bring casualties, but the Great War and the advent of many new and dreadfully effective weapons such as machine guns and mechs saw untold levels of human death and injury. Wherever they were available, these angels of mercy were rarely without work. They were a the same uniform as Vanguards, but completely grey and black with few decorations; a kamilavka instead of a ushanka, a golden censer around their neck, and a pouch and backpack full of medical supplies.

Medics are invaluable wherever the infantry are going to be in combat. They can heal infantry so long as the targeted units are not under fire. Once they have gained enough experience, they can establish an aid station at any desired location, providing frontline units a place to retreat to and reinforce rather than having to run all the way back to base.

They are not proficient soldiers, however. Their pistols provide some defense but not much, and being infantry they are particularly vulnerable to machine guns and mechs, which they can largely outrun but they cannot outrun standard infantry like Vanguards. Thus, they should be used sparingly and well protected behind dedicated combat units.

In the latest version, medics can no longer be trained from Polanian or Rusviet barracks. Only the Saxony Empire can train medics, but players can still transform any infantry by salvaging equipment from a killed medic or loot from a weapon crate.

Like Engineers, medics are armed only with simple revolvers which have poor range and damage. 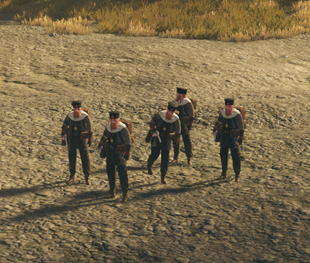 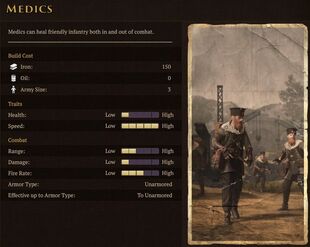