Standard Rusviet infantry armed with shotguns. Effective against other infantry.

Rusviet Vanguards are basic infantry units trained by the Rusviet Tsardom. Equipped with semi-automatic shotguns, they are effective against unarmored targets at short range.

The elite and most loyal core of the Rusviet Army have been universally equipped with trench guns. These weapons proved to be extraordinarily efficient in the close quarters and urban battlefields of the Great War; so much so, that they drew a diplomatic protest from the Saxon government.

These hardy conscripts are pulled from all walks of Rusviet life to give their lives for the state. Many are disgruntled but continue to serve, while many others truly do believe in their country. They are culturally diverse, and many are used to hard weather. Their leaders, however, see them as little more than fodder for the enemy cannons. Their uniforms are thick and warm, with boots, gloves, a grey fur-lined jacket and a tall black ushanka embellished with the Rusviet five-pointed star. Although they are poorly informed and home-sick, vanguards remain determined and unflinching.

Vanguards live up to their name: always in the front. Equipped with shotguns, they are the strongest in close quarters so long as they can get close. Being fast, they are powerful in a group, swarming the enemy ahead of the main force to clear out infantry and soften up the enemy.

However, range is the bane of these infantry. If something is preventing them from getting within effective range, like barbed wire or being suppressed by machine guns, they will get picked off without doing much damage, particularly by Polanian Riflemen. Out of all standard infantry, they are marginally the most effective against armor but are still hopeless against mechs. Sent in with units capable of slowing down or softening up the enemy like the SHM-86 Kolokol, they will make hostile infantry engagements short but sweet victories for the glory of Rusviet.

The Rusviet Vanguards are equipped with semi-automatic shotguns, which makes them best at short range and bad at long-range. Historically, Rusviet rifles were of poor quality, so they were replaced with shotguns, which are more durable and easy to maintain. They can use almost any scrap of metal as ammunition. 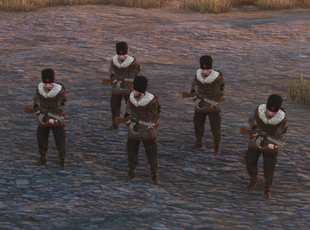 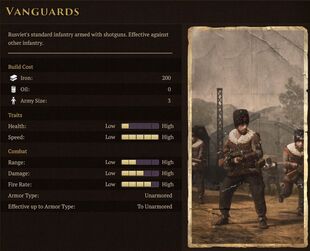