Field technicians wielding exo-suits capable of rapidly repairing armor and structures, as well as dismantling enemies, with their blow torches.

The S3-55 "Ward" is a light-armored support exosuit infantry deployed by Usonia. They specialize in rapid repairs of buildings and mechanical units while keeping pace with friendly forces.

As the Union's forces geared itself for the offense, one would assume that its lack of more durable units would leave it over-extended on long campaigns. That's where the Ward exo-suits come into play, Similar to the Rusviet SHM-60 "Groza" the exosuit covers the wearer in a series of plates and hydraulics which protect the user and support the weight of the suit, with large, armored, extended mechanical arms. On the left arm is a multi-nozzle welding tool, and the right arm bears a clawed appendage for peeling back plating and debris. The user's huge helmet is bolted directly to the frame, although large enough inside to allow head movement, with a narrow slit that not only protects the head from bullets and shrapnel but protects their eyes and faces from the brightness and heat of the welders.

The Ward is unique among exosuit infantry in that it can rapidly repair mechs and other exosuits (a squad can even repair itself). These units have immense value for Usonia - due to Usonia's reliance on high-damage, high-risk attacks, these units can give much-needed repairs in the field without being nearly as easy to kill as traditional Engineers. Unlike most support units, the Ward is dangerous on its own merits - it is deadly in close combat against any sort of mech and can pose a threat to enemy infantry. While it does not possess the mobility of the Rusviet Groza, it is similarly lethal to anything that finds itself in melee range.

Being a melee fighter and support-focused unit, it is vulnerable to units effective against light armor and that have ranged weapons; powerful AOE weapons can wipe out the whole squad. It's far from the slowest exo unit, but can struggle to close the distance or flee if caught unprotected. Enemy air units can attack it with no threat. Being moderately costly, it should never be left alone and should generally keep behind tougher mech units, patching them up as the fight continues and jumping into melee if the enemy pushes back too far.

Welding arms double as weapons for this unit. It can disassemble enemy mechs and infantry within range just as well as it can repair its allies. 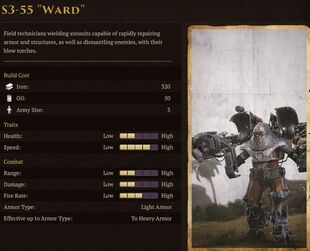 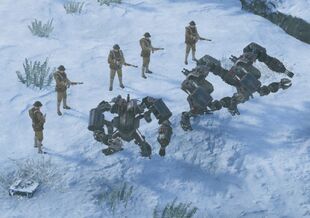