Soldiers harnessing exosuits capable of rending foes with their blades and bypassing obstacles with their rocket jump.

The SHM-60 "Groza" is a heavy infantry unit produced by Rusviet. Equipped with mechanical armor, they focus on devastating melee and deep strikes.

The Rusviet Army is not devoid of more nuanced and innovative designs: the SHM-60 "Groza" exosuit has unparalleled mobility for any mech of its size, allowing its wearer to engage in a controlled, short-ranged rocket jump.

As opposed to the Saxony Empire's Pkp 17 "Eisenhans," rather than being encased in armor the Groza's user is strapped into the front of the suit's main mechanical body, protected by some lighter plating and a heavy helmet, similar in that fashion to the Polania Republic's PZM-2 "Rycerz." However, the overall unit is much larger and sturdier to incorporate a jetpack unit and to handle the sudden forces of takeoff and impact. Instead of a cannon or mortars, each arm is tipped with large blades,

Ideal shock troopers, Grozas forgo ranged weaponry for sheer speed and melee prowess to wreak havoc in close quarters. Their jetpacks allow them to slam into the midst of enemy units and immediately start taking down everything within reach, and their ground speed is nothing to sneeze at either. They shine most when ambushing slow anti-mech units like the Lowca, the Isengrim, or field gun crews, as these units have little defense against them. Their good speed and ambush abilities makes them good for recon and raids, particularly where they are not expected. They can run in, assess the enemy force, do some damage, and dash away quickly.

Light armor and lack of any ranged attacks, however, leaves them vulnerable to gunners, numerous squads of infantry, and other mechanized infantry deal with them easily (Rycerz at range and Eisenhans in melee). They also struggle to damage anything with heavier armor. Thus they are best used in recon, raids, and ambushes where they can be supported.

Instead of mortars or cannons, Grozas are armed with a pair of hardened steel blades specially designed to slash through medium and light armor. Their melee strikes can also knock down infantry, but don't kill infantry very fast. Lastly, direct jetpack strikes do damage. 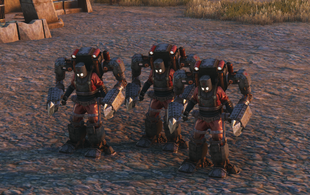 Add a photo to this gallery
Retrieved from "https://iron-harvest.fandom.com/wiki/SHM-60_%22Groza%22?oldid=4615"
Community content is available under CC-BY-SA unless otherwise noted.