An artillery mech capable of firing a barrage of rockets upon a large area.

The SHM-68 "Nakovalnya" (ШM-68 Hаковальня, Anvil) is a medium-armored artillery mech produced by Rusviet. A long-range fire support unit, it takes indirect fire to the extreme to blanket an area with explosive ordinance.

While most artillery pieces like the SLL 33 "Erlkönig" or the PZM-13 "Mocny" focus on accurate and singularly powerful artillery shells, Rusviet opted for a "more-over-magnitude" approach: saturating a large area with flying explosives to devastate buildings and clumped up enemy units. The shriek of its horde of rockets should herald a sudden need to scatter lest you die with the others.

The Nakovalnya's appearance is quite unusual as far as mechs go. Instead of legs or arms, it rolls on two large wheels and the mech's body swivels on the wheel axles. Most of the body itself is a "pipe-organ" set of large firing tubes that spit out rockets. At the back of the machine, along with the engine, are three small mechanical legs that push the machine around. The pilot is seated in a small armored cockpit on the right-hand side of the machine, accessible through a hatch in the top.

This artillery mech has unparalleled area-of-effect; quite devastating against groups of clumped enemies and dealing good damage to even heavy armor. Unlike other artillery mechs, it can fire at its full, impressive range without having to deploy, and its rockets fly up and over terrain or buildings. Its ability allows it to be set up like a long-ranged turret with decent accuracy

However, if the target is at all mobile or isolated, much of the barrage is wasted as the rockets have a tendency to miss even large targets. It has a minimum range and a very long cooldown, making it easy to rush, flank, or demolish from behind with no close-in defenses. It works best from behind the front lines, pounding and softening up enemy forces as they group up for an attack or try to bunker down. It is also heavily recommended to separate Nakovalnyas into grouped pairs to alternate their barrages; a long cooldown leaves a space between salvos to be overwhelmed.

This mech's sole armament is a set of sixteen rocket tubes fixed together. While not as long-ranged or hard-hitting individually compared to an artillery shell, for their weight the rockets carry strong warheads with a wide area-of-effect and their sheer numbers ensures more overall damage. 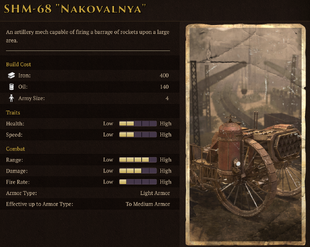 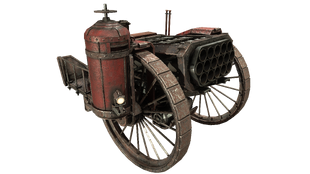 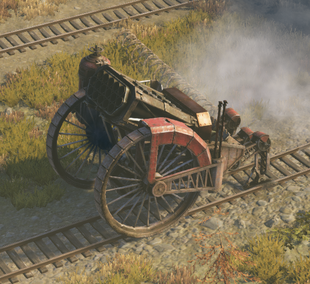 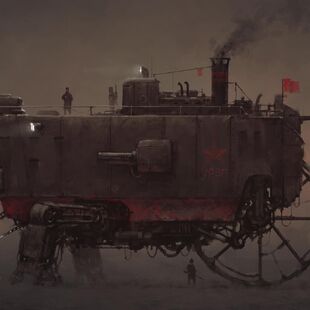